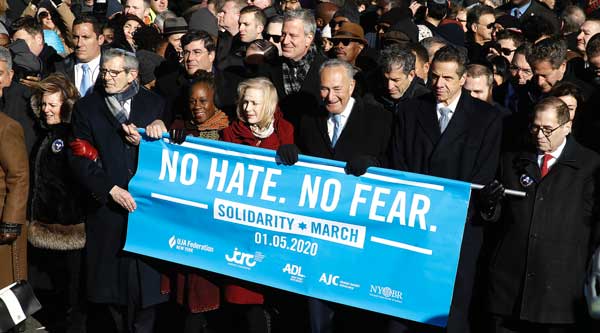 By BEN SALES
NEW YORK CITY (JTA) – After the recent rousing march to protest rising anti-Semitism in New York — where Jews have been shot, stabbed, assaulted and harassed over the past year — two big questions still loom large.

What is causing all of this? And what are officials doing about it?

The first question is fraught, bedeviling experts and community members alike. The second has some answers.

From beefing up security to bolstering community outreach, here are four ways government and community leaders are trying to break the wave of anti-Semitism that has crested over New York City.

Money For Security
On both the state and federal levels, governments are providing additional funding so that nonprofit institutions at risk for terrorism (like synagogues, religious schools and Jewish community centers) can protect themselves.

At the march against anti-Semitism on Sunday, Jan. 5, New York Gov. Andrew Cuomo announced $45 million in new funding to protect religious-based institutions. Since 2017, the state has distributed $25 million to more than 500 institutions, many of them Jewish. The funding goes to security enhancements like reinforced windows or cameras. But Assemblyman Simcha Eichenstein, who represents the Brooklyn neighborhoods of Midwood and Borough Park, said that Cuomo’s announcement was misleading because the funding was allocated last year and is only being released now.

The government funding comes in addition to $4 million in security funding for 2,000 Jewish institutions announced in October by UJA-Federation of New York, along with the local Jewish Community Relations Council. UJA is also hiring six directors who will collectively coordinate communal security for Jews in the city’s five boroughs, as well as suburban Long Island and Westchester County, and a special coordinator for the area’s Jewish summer camps.

De Blasio had upped the police presence in these neighborhoods, such as Crown Heights and Williamsburg, during the High Holidays last year. He announced, following the stabbing attack in Monsey, that he would do so again. New York Police Department Commissioner Dermot Shea recently announced that more than 150 additional police officers have been dispatched to the streets to specifically prevent hate crimes. De Blasio also announced the creation of civilian patrols to serve as community watchdogs for areas that have seen anti-Semitic incidents.

Cuomo has sent State Police to patrol Brooklyn’s Jewish neighborhoods and has grown the ranks of the State Police Hate Crimes Task Force, which was established in 2017 during a previous spike in anti-Semitism. In November, Cuomo signed a bill requiring police to undergo training on how to recognize and respond to hate crimes. And following the Monsey attack, New York Attorney General Letitia James said she would create a Hate Crimes Unit in her office.

The NYPD recently announced that it would begin tracking hate crimes in COMPSTAT, its public record of crime.

More Education
In November, the Anti-Defamation League announced that it would double the funding for its anti-discrimination program in Brooklyn schools. The program, No Place for Hate, which educates kids against bias and bullying, will now expand from 22 schools to as many as 40.

“We have to reach our young people more effectively,” de Blasio said at a press conference on Dec. 30. “Our young people have to understand this history, but we have to teach it to them. We will be adding immediately in these communities in Brooklyn additional curriculum in our schools starting next month to focus on stopping hate.”

New York City’s new head of the Office for the Prevention of Hate Crimes, Deborah Lauter, told the Jewish Telegraphic Agency last year that she plans to focus on promoting education against hate.

On the federal level, a bipartisan group of representatives proposed a bill last year that would fund Holocaust education in schools across the country.

Anti-Semitism =Domestic Terrorism
Cuomo announced that he supports legislation defining anti-Semitism as domestic terrorism. According to Jonathan Greenblatt, the CEO of the ADL, that designation would allow the government to bring its full resources to bear in the fight against anti-Semitism.

In March, Illinois Sen. Dick Durbin introduced a bill to define domestic terrorism on the federal level and require the government to combat it. The bill is motivated in part by the rise in anti-Semitism.