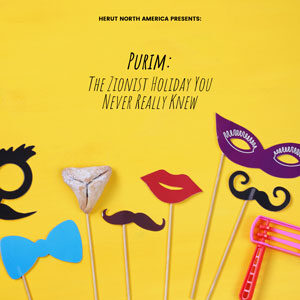 Herut North America, a leading American Zionist grassroots movement, has developed a new anthology for the Purim holiday that is offered for free upon request. This new eBook is comprised of various articles about Purim from Dr. Israel Eldad, a Zionist thinker, who was a major leader of Israel’s pre-state underground in the 1940s, and a well-known Israeli intellectual. Eldad was one of the most influential newspaper columnists in Israeli history and wrote more about Purim than perhaps any of his contemporaries. The 24-page PDF booklet also contains a brief biographical sketch of Eldad and other content.

“This Purim eBook is titled Purim: The Zionist Holiday You Never Really Knew, and we created it at this time because Dr. Israel Eldad’s brand of Zionist optimism is needed precisely in these dark days of the pandemic,” said Karma Feinstein Cohen, the executive director of Herut North America. “Our fervent hope is that through this unique compilation, readers will be inspired to think about Israel, Zionism, Judaism, and Jewish history in new ways.”

This anthology includes two full essays by Dr. Eladad about Purim and a recently-unearthed over 50-year-old interview, which was discovered by Herut researchers, about anti-Semitism given by Eldad to reporter Geula Cohen (1925-2019) in 1969 in Israel Magazine titled “Why The Jews Are Hated.”

“Zionist education is Herut’s main mission, and has been since our inception. That is one reason for the publishing of this Purim eBook this year,” said Herut North America’s National Director Moshe Phillips. “But, we also thought that with this year being the 25th anniversary of Dr. Eldad’s death it was a most fitting way to draw attention, to not only Eldad’s life, but to his ideas as well.

Free copies of Purim: The Zionist Holiday  You Never Really Knew as a printable PDF may be obtained at https://herutna.org/purimbooklet.

Herut is an international movement for Zionist pride and education and is dedicated to the ideals of pre-World War Two Zionist leader Ze’ev Jabotinsky. More about Herut may  be found at www.HerutNA.org.