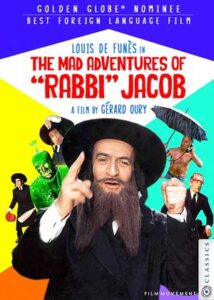 ALBANY–B’nai Sholom in Albany will present a screening of “The Mad Adventures of ‘Rabbi’ Jacob,” a French comedy of frantic disguises and mistaken identities on Saturday, Feb. 15, at 7:30 p.m. B’nai Sholom is located at 420 Whitehall Rd., Albany.

Directed and written by Gérard Oury, the film stars Louis de Funès as a bigoted businessman who, through a bizarre combination of events created in an attempt to evade the police, is forced to impersonate Rabbi Jacob, a beloved figure returning to France after 30 years in the United States. A hodgepodge of plot twists and slapstick shenanigans culminates in a chaotic climax.

Released in 1973, the 100-minute film is rated G. It is in French, English, Hebrew, Yiddish and Arabic with English subtitles.

Refreshments will be available.  Suggested admission is $5.

The film and image were provided by Film Movement.