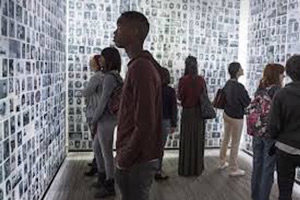 Students of a French high school class visit a Holocaust museum as part of their research for a national competition about the Holocaust in the French movie “Once in a Lifetime.” The film will be shown at the AJCC on Saturday evening, Feb. 10.

ALBANY–The Cinema International film series of the Sidney Albert Albany Jewish Community Center (AJCC) will show the French film “Once in a Lifetime” at 7 p.m. on Saturday, Feb 10. The 105-minute film, which is in French with English subtitles will be shown at the Center, 340 Whitehall Rd., Albany.

The film focuses on an underprivileged high school class in France that enters a national competition, under the supervision of its teacher, Anne Gueguen, on the theme of child victims of the Nazi concentration camps. Though the students initially had resisted, a face-to-face encounter with a Holocaust survivor changes the students’ attitudes.

As a result of the Holocaust education that ensues, the once rebellious teens soon begin to see one another —and themselves— in a whole new light.

According to AJCC organizers of the film program, “Once in a Lifetime” demonstrates the enduring impact of the Holocaust in transforming future generations.

Admission will be $5 for members and $8 for guests. No reservations are needed and walk-ins are welcome, but organizers request that those planning to attend register online at albanyjcc.org/register. Rachel Arnaud at rachelar@albanyjcc.org or by phone at 518-438-6651 can provide details.