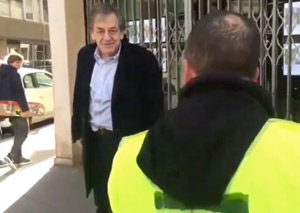 (JNS) – Protesters from the “yellow-vests” movement who have been demonstrating over recent months against Macron’s government yelled anti-Semitic profanities recenly at liberal Jewish philosopher Alain Finkielkraut, who was targeted with labels such as “dirty Zionist s***,” “Dirty Jew,” “fascist,” “Palestine,” in addition to being told, “You’re a hater, you’re going to die, you’re going to hell,” “Go home to Israel” and “Tel Aviv, back to Tel Aviv.”

Finkielkraut had to be guarded by police.

The incident was part of the latest string of increasing anti-Semitic attacks in France.

The previous day, two teenagers were apprehended after allegedly firing shots with an air rifle towards a Recently, a tree commemorating a young French Jewish man who was tortured to death in 2006 was cut off, the word “Juden” (German for “Jew”) was scribbled on the window of a Paris bagel bakery, and swastikas were drawn on Paris mailboxes decorated with a picture of former government minister and Holocaust survivor Simone Veil, who died in 2017.

On Tuesday morning, Feb. 19, as many as 80 gravestones at a Jewish cemetery in France were discovered vandalized.

French Interior Minister Christophe Castaner said recently that that the number of recorded anti-Semitic acts soared by 74 percent in 2018.

Jordanians give substantial control of the Temple Mount to Palestinians
Top U.S. admiral warns of Iran’s ‘growing capability’ against enemies, by air and ship