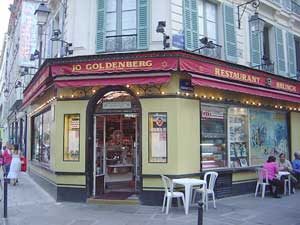 The Jo Goldenberg Restaurant in the Jewish quarter of Paris, which was attacked by Palestinian terrorists in 1982. Photo courtesy of David Monniaux via Wikimedia Commons.

By ELDAD BECK
(Israel Hayom via JNS) – Days after it was revealed that the former head of France’s domestic intelligence agency made a deal with the terrorist organization behind a 1982 terrorist attack in Paris, affording its operatives free movement in the country in exchange for a promise of no further attacks on French soil, new questions have arisen regarding France’s handling of the affair.

The Scandal Continues
French MP Meyer Habib has made efforts to learn why the leader of the terrorist cell responsible for the attack, Mahmoud Khader Abed, is now living outside of Ramallah and has not been extradited to France. Habib raised the issue recently with Israeli Prime Minister Benjamin Netanyahu, who immediately expressed a willingness to help with Abed’s extradition, should Paris seek it.

Habib has since been trying to get answers from French authorities as to the steps they have taken to extradite Abed and the three other members of the terrorist cell now living in Jordan and Norway, but has yet to receive an answer.

“So far, we have heard a lot of words, but [seen] very little action and the scandal continues,” said Habib. “Just a few days ago, we marked 37 years to the anti-Semitic attack on the [Chez Jo] Goldenberg restaurant. There hasn’t been progress in the investigation for years. It is only thanks to the determination and amazing work of Judge Marc Trevidic that in 2015, the four terrorists responsible for the attack were identified. Despite repeated calls for extradition, the murderers continue to live happy lives, undisturbed. This is morally intolerable. France must take care to extradite the killers.”

How Could France…?
Habib, who intends to demand a parliamentary investigative committee be established to look into the secret pact between France and the Abu Nidal Organization, a Fatah offshoot, after France’s National Assembly convenes following a summer recess, had sharp words for the French authorities’ conduct.

“How can France, with its values and glorious history, close a deal with the most barbaric terrorist organizations … contrary to the basic principles of justice? How can a country that respects itself and has suffered so much from terrorism, with over 260 killed since 2015, live with the fact that the murderers of its citizens are living in peace and tranquility? Above all else, how can the victims’ families or the survivors mourn while such an injustice persists? It’s unbearable!”

Habib continued, “Terrorists who kill French people and ruin their lives must pay a price. That is the foundation of justice and morality. A terrorist that kills a French citizen must be neutralized at any price, dead or alive. For comparison, the Palestinian terrorists [responsible for] the 1972 Munich Olympics were taken out one by one by the Mossad, sometimes 30 years later. I ask France to make every effort to achieve the extradition of the four terrorists [responsible for] the attack on the Goldenberg restaurant! I ask to shed light on this issue and remove the security censor on the subject.”

Following the attack at the Chez Jo Goldenberg deli in Paris, in which six people were killed and 22 wounded, the former head of French domestic intelligence, Yves Bonnet, made a secret pact with the Abu Nidal faction of Fatah — guaranteeing Abu Nidal operatives free movement within France in exchange for a promise of no further attacks on French soil.

Who’s running in Israel’s September elections?
What is 8chan, the site linked to shooters in Christchurch, Poway and El Paso?