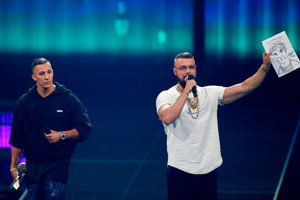 The rappers Farid Bang, left, and Kollegah receiving the award for best hip-hop album at Germany’s Echo Music Awards. The prize for the album, which contains lyrics referring to the Holocaust and Auschwitz, has set off an uproar in Germany. Credit Alex Schmidt/Agence France-Presse — Getty Images

By MELISSA EDDY and ANDREW CURRY
The New York Times

BERLIN — In Germany’s hugely popular hip-hop music scene, one of the biggest albums of the past year was from two trash-talking rappers who rhymed about their prowess in bed and in the weight room and about violently dominating their opponents.

The album has racked up sales, but has also attracted a different sort of attention. In one song, the pair boast about how their bodies are “more defined than Auschwitz prisoners.” In another, they vow to “make another Holocaust, show up with a Molotov.”

Republican Senate candidate, who called for country ‘Free from Jews,’ could be Dianne Feinstein’s challenger
Does Natalie Portman’s snub of Netanyahu make her the face of liberal Zionism?