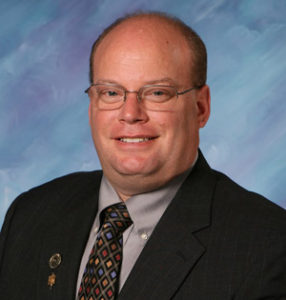 SCHENECTADY–Congregation Gates of Heaven (CGOH), has announced that Jesse Holland has been chosen by the CGOH Board of Advisors to be the recipient of the 2019 Distinguished Service Award. The award will be presented at a reception in his honor at the temple, 852 Ashmore Ave., Schenectady, on Sunday, May 19, at 2 p.m. The program is free and open to the public.

The Distinguished Service Award, established in 1997, is given to a current active member who has been a congregant for a minimum of 25 years and who has demonstrated during that time, through leadership and

Board of Advisors Chairman Richard Dolins said, “Jesse has demonstrated outstanding dedication and hard work to our congregation, the greater Jewish community, and the development of our region through his business, Sunrise Management and Consulting.”

Holland has served Gates in many capacities over his 29 years of membership. He has been a member of the board of trustees, treasurer, and member of the executive committee. He has been chairman of the finance committee, a role, which is comprised of budget preparation and analysis. He is chairman and directs the activities of the endowment committee, ensuring the congregation’s long-term financial health and fiscal sustainability. He has been active in the Jewish Food Festival, the Cherry Blossom Festival, and with the brotherhood.

In the greater Jewish community, Holland has served the Jewish Federation of Northeastern New York in various ways and is on its board of directors. He has served as a member and chairman of the endowment committee, and is the chairman of the life and legacy committee, which administers a program from the Grinspoon Foundation to encourage legacy giving to Jewish organizations.

Holland is the founder and president of Sunrise Management and Consulting, a commercial real estate brokerage licensed in several states in the Northeast. Sunrise manages multifamily housing communities throughout the Greater Capital Region. Holland’s company sponsors an annual multifamily summit in partnership with the Albany Business Review, and  his research team collects, analyzes, and publishes vital housing data. Holland teaches and mentors on the subject of housing property management. He is a certified property manager and accredited residential manager. Holland and his company were named a Humane Hero by the Mohawk Hudson Humane Society.

Holland has been a long-time member of the Niskayuna Fire Department District #2, has been a fire police captain, and is a certified EMT.

Holland and his wife Mindy live in Niskayuna. They have two adult sons.