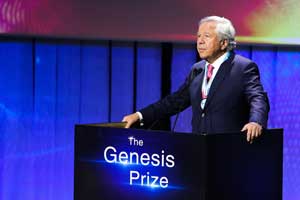 New England Patriots owner and Jewish philanthropist Robert Kraft, winner of the 2019 Genesis Prize, seen during the ceremony at the Jerusalem theater on June 20, 2019. Photo courtesy of Flash90.

(JNS) – The Genesis Prize Foundation (GPF) and the 2019 Genesis Prize winner Robert Kraft announced the launch of “Speak Out for Israel”—an international campaign designed to help combat the global rise of anti-Semitism and attempts to delegitimize the Jewish state.

Through this campaign, GPF and Kraft plan to award $1 million in grants to Israeli nonprofit organizations capable of delivering an innovative response to this grave challenge.

“The theme of the 2019 Genesis Prize focuses on combating global anti-Semitism and increasingly aggressive efforts to challenge the legitimacy of the State of Israel,” said Stan Polovets, co-founder and chairman of the Genesis Prize Foundation.

“These grants are designed to help Israel’s nonprofit sector stand up to this scourge by promoting a truthful, inspiring narrative of Israel to audiences around the world, countering Israel’s detractors with factual, positive messages of what the Jewish state truly represents. We invite other donors to join Robert Kraft and our foundation in this effort.”

“Speak out for Israel” grants will be awarded on a competitive basis to entities that propose programs designed to tell the story of Israel by emphasizing democratic values, such as tolerance and respect for the rights of minorities, as well as scientific, technological and cultural achievements. The programs will aim to build cross-community bridges, dismantle stereotypes, and educate Jews and non-Jews alike about Israel.

“Israel is so special to me and my family,” Kraft, owner of the New England Patriots, said in a statement. “It’s where I took the love of my life on our honeymoon in 1963. Since then, I have sponsored dozens of missions and countless other trips for people to experience Israel for the first time.

“Spiritually, there is no place like it on earth,” he continued. “The more people learn about its history, its diverse culture and its innovation, the more we can do to change stereotypes and end antisemitism. That’s why Speak Out for Israel is so timely and important to Israel’s future.”

The Genesis Prize Foundation invites interested nonprofits registered in Israel to apply for “Speak Out for Israel” grants until Dec. 12. The competition is being administered by Matan-United Way Israel, with winners to be announced in April 2020.

Arab states are claiming the heritage and seeking the return of their expelled Jews’ possessions
Nazi memorabilia bought at auction for $660,000 given to Jewish group for safekeeping