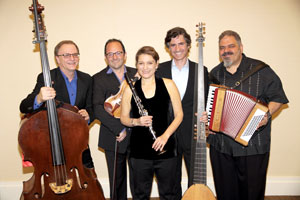 The Glimmerglass Festival will present a concert by klezmer ensemble Big Galut(e), Tuesday August 8, 5:00 pm in the Pavillion, behind the mainstage. In keeping with this season’s themes of Home and Community, the five-member ensemble will present a variety of music from the Jewish Diaspora’s many homelands, including Old World dances, traditional folk songs, jazz tunes, and Yiddish-flavored takes on classic musicals.

Winners of the Simcha Prize at the 2017 International Jewish Music Festival in Amsterdam, this crossover quintet has been heard on PRI’s The World and WNYC’s New Sounds, and has appeared at colleges and universities from Stanford to Oberlin, on chamber series from Hawaii to New York, at the National Yiddish Book Center and New York Klezmer Series, and at synagogues and Jewish Community Centers nationwide.

Does Nixon’s story contain a warning for Trump?
An atheist Muslim on what the left and right get wrong about Islam