Good relations with Japan? Not a shoo- in! Did Israel offend Japan with dessert menu? 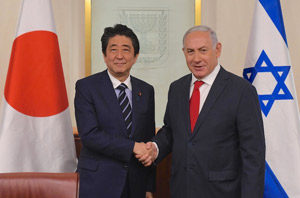 NEW YORK CITY (JTA) – After a day of high-level meetings in Israel on May 2 — some of which involved the stressful topic of Middle East peace negotiations — Japanese Prime Minister Shinzo Abe sat down to dinner in Israeli Prime Minister Benjamin Netanyahu’s Jerusalem residence.

According to multiple reports, things went smoothly until dessert — chocolates served in a shoe.

That presentation choice would seem bizarre to an eater from just about any culture, but it was especially out of place in front of Netanyahu’s Japanese guests, Abe and his wife, Akie. Japanese etiquette stipulates that shoes should be kept outside of one’s home and office, among other taboos.

Israeli celebrity chef Moshe Segev, who was in charge of the meal, didn’t see anything wrong with the idea, posting about the night on Instagram. His publicist said the shoes were “sculptures” crafted by artist Tom Dixon.

But the faux pas was not lost on Japanese officials.

“What exactly did the illustrious chef Segev think to himself. We can’t understand what he was trying to say here,” one unidentified Japanese diplomat told the Hebrew-language paper Yediot Acharanot. “If it is humor, then we don’t think it is funny. I can tell you we were offended on behalf of our prime minister.”

A senior Israeli official told the paper the decision was “stupid and insensitive.”

In addition to potential future Israeli-Palestinian peace talks, Abe and Netanyahu also discussed cybersecurity cooperation between Israel and Japan. But the shoe story by far has been the most talked about story from Abe’s visit.

As one wag said, At least the main course wasn’t sole.

180th birthday of Beth Emeth noted by religious school
What will Iran do? Trump has pulled the U.S. out of the nuclear deal