DC Report
By Douglas Bloomfield
Donald Trump is once again threatening to shut down the government if doesn’t get the money he wants to build his Mexican border wall. He won’t and he won’t.

Trump tweeted the threat 6:13 am Sunday, July 29, from his New Jersey golf club, when it was still too early for another day on the links.

“I would be willing to ‘shut down’ government if the Democrats do not give us the votes for Border Security, which includes the Wall! …We need great people coming into our Country!”

What he means by “great people” apparently refers to white Western European Christians, like Norwegians as he once suggested or from Scotland like his mother or Slovenia and the Czech Republic like his first and third wives, certainly not brown people from countries south of the Rio Grande River or Muslims from the rest of the world.

I’m glad he wasn’t president when my grandfather stepped off the SS New York in 1906. His race was listed as “Hebrew” on Ellis Island immigration records, and while he could read and write English (having lived at least a decade in Wales), he had only $5 in his pocket.

GOP Fears Shutdown
Top Republican leaders thought they had talked Trump out of a shutdown when they met with him recently at the White House, but were blindsided by the latest tweet.

House Speaker Paul Ryan (R-Wisconsin) and Senate Majority Leader Mitch McConnell (R-Kentucky) fear a shutdown could cost them their jobs in the November 6 mid-term elections. They know past shutdowns have cost Republicans dearly. Trump should ask his friend Newt Gingrich about that.

The two leaders told Trump negotiations on a bipartisan spending bill are going well and that shutdown threats are not helpful.

Sen. Ron Johnson (R-Minnesota), chairman of the Senate Homeland Security Committee, which has jurisdiction over the wall construction, said a shutdown would not be “helpful” “so let’s try and avoid it.”

Senate Appropriations Chairman Richard C. Shelby (R-Alabama) also told Trump the votes aren’t there for what he is demanding.

Sees Democrats As Obstructionists
Ohio Rep. Steve Stivers, who is leading the fund-raising for GOP House candidates, told ABC This Week on Sunday that he doesn’t “think we’re going to shut down the government.” 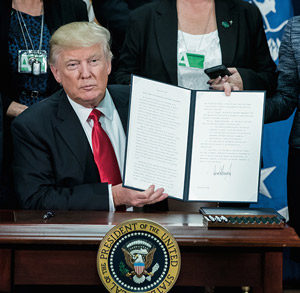 Trump thinks a shutdown works in his favor by letting him paint Democrats as obstructionists, but with GOP control of the House and Senate, that will be a hard sell.

Republicans facing tough elections in what they fear will be a “blue wave” of Democratic votes, don’t want to see Trump shut down the government so close to the midterm election because the Republican-led Congress couldn’t— or wouldn’t—meet his demands.

Trump can’t get enough Republican votes for his wall so he is already trying to blame the Democrats for his failure.

Trump Keeping Promises!
The wall is important to Trump because it was his first big campaign promise and because tough immigration restrictions play well with his white, nativist conservative base.

He vowed to put up the wall and make Mexico pay for it; when that was roundly rebuffed he decided U.S. taxpayers should foot the bill, and that’s where the issue stands today in must-pass government funding legislation.

Trump likes to boast that he keeps his promises (unless they involve protecting Social Security, Medicare and Medicaid and providing low cost health care).

First he held thousands of immigrant children hostage to his demands for $25 billion to build his wall.  It backfired and he was forced by public outrage to retreat. In typical Trump fashion, the whole thing was handled so clumsily that many children may never see their parents again.

Trump instituted a “zero-tolerance” policy of separating immigrant children from their parents and holding them hostage in wire cages until Congress agreed to fund his wall. Attorney General Jeff Sessions justified the policy with a biblical passage used in the past to justify slavery, segregation in the South and by the Nazis to justify demands for obedience to their laws.

A Boon For Democrats?
It’s hard to know for sure how serious Trump is and whether this threat is not just another attempt to divert attention from his growing string of blunders that included the Putin meeting and press conference in Helsinki, payoffs for various mistresses, threats to obliterate Iran, the Scott Pruitt scandals, Michael Cohen turning on him, the Manafort trial, and his claim that Russian election meddling is really meant to benefit Democrats.

It was a tweet-filled Sunday marked by more attacks on the media, which he likes to call the “enemy of the people,” a toxic line borrowed by Lenin and Stalin, along with more shots at Robert Mueller and Hillary Clinton plus more denials of collusion (despite hard evidence of intent on his son Don Jr.’s e-mail exchange with a Russian friend offering dirt on Hillary).

In February the president said, “I’d love to see a shutdown” over immigration funding. When the money he wanted wasn’t in the government funding bill he signed in March, he vowed never to sign another one that didn’t pay for his wall. In May he tweeted “Our country needs a good ‘shutdown’ in September to fix mess.”

He could wind up calling his own bluff and electing a lot of Democrats.

A year after Charlottesville, the ‘alt-right’ is not so united. But some of its ideas have gone mainstream.
Ex-NY Assembly Speaker Sheldon Silver gets 7 years for corruption