Greenblatt: ‘Unconscionable’ for PA to claim Bahrain attendance is a ‘betrayal’ 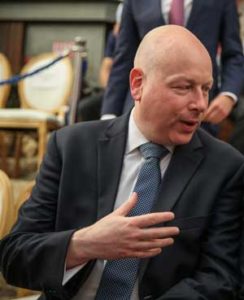 (Israel Hayom via JNS) A day-and-a-half after the Palestinian Authority released Hebron businessman Saleh Abu Mayala, whom it had arrested after he returned from the U.S.-led economic conference in Bahrain, U.S. Special Envoy to the Middle East Jason Greenblatt blasted the P.A. over the incident.

Greenblatt wrote on Twitter: “It is unconscionable that the PA would arrest someone for attending the workshop in Bahrain claiming his attendance was an act of ‘betrayal.’ No! Betrayal is the PA arresting its own people for having the courage to discuss new ideas for a better life.”

Mayala had attended the recent two-day conference in Bahrain with a small group of Palestinian colleagues, led by businessman Ashraf Jabari, who is viewed with deep suspicion by fellow Palestinians and authorities for his close ties to Jewish settlers in the West Bank.

A P.A. security official said intelligence services detained Mayala in Hebron for interrogation without elaborating on the reason.

Aside from Jabari, the identities of the other Palestinian participants were not publicly announced, although a picture of some of them at the conference was widely circulated on social media.

According to Palestinian reports, the decision to release Mayala came following a threatening letter from the U.S. embassy.

Greenblatt welcomed his release in another Twitter message, and said that U.S. “looked forward to continuing our conversation with all who attended the workshop & anyone else who wants a better future for the Palestinians.”