Has U.S. foreign policy been wrecked by Rex Tillerson?

DC Report
By Douglas Bloomfield
If you had any doubts about the low priority this administration puts on diplomacy, it was made painfully clear this week on opposite sides of the globe.

The White House released its Fiscal Year 2019 budget, which calls for more deep cuts for the State Department, which has been shedding experienced diplomats, senior managers and, most important, relevance.

Moscow Intervenes
It reveals, if anyone had doubts, the extraordinarily low value this administration places on diplomacy, especially since it comes alongside enormous increases it seeks in defense spending.

Six thousand miles away Israel clashed with Syrian and Iranian forces in what could spark a dramatic escalation in that regional conflict. The Israeli Air Force shot down an Iranian-made drone and reportedly destroyed half of Syria’s air defense system before losing an F-16 to an Iranian-made missile.

Moscow stepped in to prevent escalation; the United States was a mere bystander.

Russian President Vladimir Putin phoned Israeli Prime Minister Benjamin Netanyahu to urge him to stand down; apparently he gave the same message to his Iranian and Syrian allies.

Trump/Putin Chat
Trump and Putin spoke the following day and versions released by both sides didn’t mention the clash but focused on the moribund Israeli-Palestinian peace process, a Russian plane crash and North Korea.

Secretary of State Rex Tillerson is on a five nation Mideast tour that doesn’t include Israel.  He couldn’t be bothered to stop by even if just to reassure our closest ally in the region of American support in the midst of one of its most serious incidents in recent years.

Is U.S. Policy Irrelevant?
Defense Secretary James Mattis said Israel has “an absolute right to defend itself.” Trump tweeted a complaint about his predecessors “stupidly spending $7 trillion in the Middle East.” 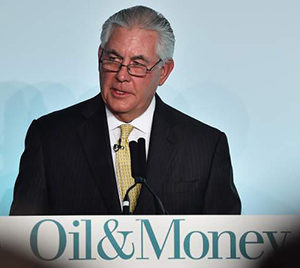 Washington surrendered the playing field to Moscow at a time when America’s global footprint is shrinking and Russia’s is growing —something that can’t possibly be good for this country or for the Jewish state.

This also shows how irrelevant Tillerson and U.S. foreign policy have become. There was no American call for restraint, no warning to Syria and Iran and no effort to coordinate with the Russians. In other words, we’re rooting for you, Israel, but you’re on your own.

Russia is not only the patron of Syria and Iran but is also in close touch with Israel to make sure their air forces don’t clash in sorties over Syria.

What Will Israel Do?
More eruptions can be expected as Israel seeks to thwart Iran’s effort to establish a long-term military presence in Syria, presumably to advance its goal of destroying the Jewish state. If Washington remains on the sidelines, reluctant to challenge Russia’s growing influence in the region, Israel will feel compelled to look increasingly to Moscow, as will secular moderate Arab states fearful of Iranian ambitions to spread its hegemony.

Tillerson’s Credibility
One of Tillerson’s job qualifications cited during his confirmation process was his experience dealing with Putin and Russia. This is a time that should put to use, especially since the U.S. isn’t speaking directly to Syria and Iran.

He should have immediately jetted off to Moscow to get Trump’s pal Vlad to lean on his Iranian and Syrian clients to make sure a broader war doesn’t break out. That didn’t happen. Lebanon, Syria and Gaza are bristling with tens of thousands of missiles targeting Israel. Meanwhile, Russia has been upgrading its allies’ air defense systems and decreasing Israel’s qualitative edge.

Dan Shapiro, the previous U.S. ambassador to Israel, called Tillerson’s failure to visit Israel at this time “malpractice” and said it is “yet another blow to Tillerson’s credibility as an authoritative voice for U.S. policy.”

Tillerson has visited Israel only once, as part of Trump’s entourage. That itself is unusual, but it may be that he doesn’t want to tread on Jared Kushner’s turf, since Trump put his son-in-law in charge of the Israel portfolio, backed up by two inexperienced former Trump organization lawyers.

Efforts At Diplomacy Questioned
Tillerson has been weakened by months of reports that he was out of favor and out of the loop with Trump and rumored to soon follow the growing exodus of top administration officials.

He has frequently been undercut by Trump and White House aides, with the president once humiliating his top diplomat by tweeting that he was “wasting his time” trying to open negotiations with “Little Rocket Man,” the North Korean ruler.

Tillerson himself doesn’t seem to have much faith in diplomacy either.

Values like “freedom, human dignity, the way people are treated” cannot be allowed to “create obstacles to our ability to advance our national security interests, our economic interests,” he recently told the New York Times.

An engineer by profession, he came from leading Exxon-Mobil with no diplomatic experience and little interest in surrounding himself with those who did.  His attempts to drastically shrink his agency have decimated the department, driving out some its most talented people and not bringing in new leaders.

Many key posts in State Department management and our embassies abroad are empty.  Most notably, we still don’t have an ambassador to South Korea, one of the world’s most critical flashpoints.

“This administration has no strategic vision,” said a former State Department official in the George W. Bush administration. Another noted, Tillerson “is out of his depth and operating with one hand tied behind his back.”

Tillerson is not just downsizing his department, he is downsizing American’s influence around the world.

America’s allies can’t support American policies if they don’t know what those are. The president seems to make policy off the cuff, the secretary of state is largely sidelined, Trump’s secretive son-in-law has a mystery portfolio and is not answerable to Congress, and it is not uncommon for assorted officials to make (or leak) policy pronouncements with little or no coordination and questionable authority.

Rex Tillerson deserves a lot of credit for that distinction.