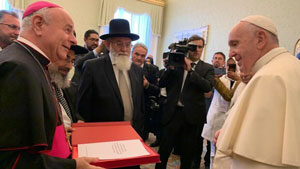 (JNS) The heads of major monotheistic faiths signed a document at Vatican City in Rome on Monday, Oct. 27, that calls on doctors around the world not to assist in killing people, even if they are terminal patients.

The Jewish faith and other monotheistic religions constitute the act of euthanasia, also called “mercy killing,” as actual murder with the assistance of medical personnel.

Following an initiative by Rabbi Professor Avraham Steinberg, an interfaith committee, established together with representatives of other religions, formulated a document “on the importance of continuity of life and the meaning of murder for a patient, his family and even for the element carrying out the murder,” according to a spokesperson for Israel’s Chief Rabbinate.

“The declaration details the importance of life for all persons who were created in the Divine Image and notes that the value of life is a supreme value for all of the participating faiths.”

Joining in this position paper were representatives of Sunni Muslims from Indonesia—the largest Sunni group in the world—the Greek Orthodox Church and other.

A chief rabbinate delegation traveled to the Vatican to sign the declaration.

“This is an historic day in which representatives of all faiths sign a statement calling for the saving of life,” said Chief Rabbinate Council member and chief rabbi of the city of Kiryat Ono Rabbi Ratzon Arousi. “The sanctity of life is an important value in Judaism. Happy is man that was created in the image of God, and his life is determined by God.”

The signed document was presented to Pope Francis.