Hebron: Is it a city without a solution? 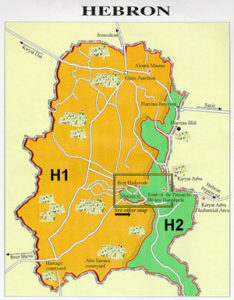 By JONATHAN S. TOBIN
(JNS) – Israeli Prime Minister Benjamin Netanyahu’s decision not to extend the mandate of an international observer group in Hebron is likely to be denounced by some as yet another obstacle to peace, as well as being politically motivated. Critics are probably not wrong about the latter point, as Netanyahu is in full campaign mode lately hoping to compete successfully for the votes of Israelis who are either West Bank settlers or their sympathizers. But the idea that the personnel of the Temporary International Presence in Hebron (TIPH) are a force for peace misunderstands the nature of the problem in this city.

After more than 20 years, the TIPH has proven to be anything but temporary. The group was created in 1997 as part of a follow-up agreement to the Oslo Accords signed by Netanyahu during his first term as prime minister. Though his critics continue to promote a false narrative that holds that he destroyed the peace process begun by Yitzhak Rabin and Shimon Peres after his 1996 election victory, Netanyahu kept negotiating with the Palestinians. He allowed the Palestinian Authority partial control over the city of Hebron, as well as by signing the Wye River Memorandum with then P.A. leader Yasser Arafat that withdrew Israeli forces from part of the city and expanded the TIPH.

But as with every other element of the Oslo Accords, that effort to calm the explosive situation in Hebron failed.

Impartial?
Over the years, while the Palestinians and their supporters complained that the TIPH was powerless to resist both the Israeli Defense Forces and the Jewish settlers in Hebron, Israelis see it as a biased group that supports efforts to evict Jews from the city. In the last year, two filmed incidents in which TIPH staff was seen letting the air out of the tires of a car belonging to a Jewish resident of the city and slapping a 10-year-old Jewish boy raised the hackles of the Israeli government. Under the circumstances, it’s hardly surprising that Netanyahu has decided that the situation isn’t being helped by the TIPH’s presence.

In a conflict that is deeply complex and where both sides have narratives in which they see themselves as victims—and their opponents as irremediably hostile and violent—no place reinforces those stereotypes as much as Hebron.

In 1968, Jews sought to reclaim lost Jewish property, including synagogues and the government eventually allowed them to build a nearby settlement, Kiryat Arba. But settlers refused to be kept out of the city that housed the ancient shrine of the Tomb of the Patriarchs and Matriarchs—or Ma’arat Hamachpelah, which tradition states is the burial place of Abraham, and other biblical patriarchs and matriarchs—and moved into the city in 1979. Thus began the anomalous situation in which a tiny Jewish community exists in a city of extremely hostile Arabs.

That community has successfully restored the Jewish presence to a place where Jewish nationhood can be said to have begun. But it has also suffered a long list of terror incidents.

Mutual Delegitimization
Unfortunately, the violence has not been a one-way street. In 1994, a Brooklyn, N.Y.-born Jewish settler named Baruch Goldstein went to the tomb and murdered 29 Palestinians at worship in cold blood. Goldstein, who was himself killed by some of the survivors of his murderous assault, became something of a hero to Jewish extremists. Like Palestinian murders of Jews, his act of terrorism only fed a mutual narrative of delegitimization and hate that continues to fuel the conflict to this day.

It was in that context that Netanyahu agreed to the partial withdrawal from Hebron and instituted the TIPH.

The conflict in Hebron is one where both sides can be said to be right and wrong. Palestinians are still determined to drive Jews out of their small enclaves on historically Jewish-owned property in the city, as well as from the tomb. Yet it’s also true that the security needed to defend the Jews there makes it difficult for Palestinians to live normal lives inside parts of the city.

Radical Residents
As for the settlers, they are defending Jewish rights and history by being there—their presence making it clear that Jews will not go back to the pre-1967 situation, when they were forbidden from entering the Machpelah and going past the seventh step of the tomb. Yet it must also be admitted that if the Arabs of Hebron are among the most radical in the West Bank, then so, too, are the Jews there reputedly among the most radical in the settler movement.

As anyone who has visited the city can attest, while the place resonates with history, it also sizzles with tension as the two sides live uncomfortably close to each other in a toxic brew of anger and violence. While the TIPH was supposed to be a calming influence, it merely supported the Palestinians against the Jews.

Coexistence Questions
In that sense, Hebron is the Israeli-Palestinian conflict in microcosm. If there is to be peace, then both sides must recognize each other’s right to be there—something that the Palestinians seem unwilling and unable to do. But by the same token, if Jews want to live in Hebron, they can’t think of the approximately 200,000 Arabs there as interlopers and the several hundred Jews as the only legitimate residents. Given the historic significance of Hebron, physically separating the two communities is impossible. Either way, Palestinians can’t remain stuck in their 100-year-old war on Zionism, which simply encourages the far smaller number of Jewish extremists.

In the end, the solution for Hebron involves a commitment to mutual coexistence. Whatever one may think of the hopes that were initially placed on the TIPH, living and working together needs to be done by Jews and Arabs themselves—not by biased observers that have no real stake in Hebron’s future.

Jonathan S. Tobin is editor in chief of JNS—Jewish News Syndicate. Follow him on Twitter at: @jonathans_tobin.

US-Israel relations – an American perspective
How should Jewish leaders confront challenge of BDS groups within their communities?