Here’s how Birthright guides talk about the Palestinians 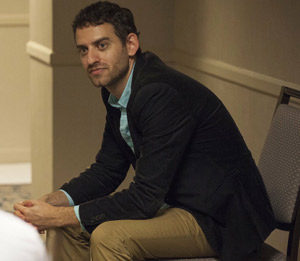 Birthright guide Daniel Rubenstein says he discusses the Palestinian and Israeli views of their conflict on the tours he leads. Photo courtesy of Rubenstein.

By BEN SALES
NEW YORK CITY (JTA) – When Samuel Green talks about Israel’s West bank security barrier with the Birthright groups he guides, he first explains the Israeli view that the barrier was built to prevent Palestinian terrorists from breaching Israeli territory and that Israelis generally feel it has saved lives. But then he’ll talk about what the barrier— which is part wall, part fence — means for Palestinians: how it cuts into West Bank territory, how it has separated people from their farmland, how they see it as an imposing wall.

Important Discussion
“It’s a disservice to the people in front of me to leave out such information,” Green said. “So if you’re trying to understand why there’s conflict, you have to understand why people are annoyed. It’s important to talk about.”

That approach contrasts with the one viewed by 2.7 million people in a viral Facebook video taken by activists of IfNotNow, a group of young American Jews who oppose Israel’s occupation of the West Bank. In the video, a Birthright tour guide spars with a participant on a Birthright bus over the status of the West Bank.

Rather than aim to present a range of views on Israel’s control of the territory, the guide says “Israel sees the West Bank as part of Israel” — a misleading claim that does not accord with the legal status of the territory or encompass the variety of ways Israelis see it.

Soon after the bus argument, several participants on that Birthright trip staged a walk-off from the tour and visited Palestinian areas. It was one of three such walk-offs conducted in recent weeks— all organized by IfNotNow — to protest what the group calls Birthright’s silence on Israel’s occupation.

Presenting A Range Of Opinions
The walk-offs have sparked a debate over whether Birthright —a popular 10-day free tour to Israel for young Jews—has a responsibility to grapple with Israel’s control of the West Bank. Some 40,000 young Jews, mostly from North America, go on Birthright every year. For some it is their first exposure to the country.

But Birthright tour guides say the debate is unnecessary. While acknowledging that they speak from an Israeli perspective, the guides said they make an effort to represent a range of opinions on the tour —including Palestinian views —and are happy to answer any questions.

Certification Course
“In general, what tour guides are taught is that it’s not about us,” said Daniel Rubenstein, an immigrant to Israel from Texas who is about to lead his fourth Birthright trip. “As educators, it’s our job to teach what the various players in this region, in this conflict and in this shared society are saying, and for us to articulate the basic vision of Zionism as well as Palestinian national identity.”

In addition to completing Israel’s two-year certification course for tour guides, most Birthright guides must complete a three-week course run by Birthright. Guides said the course focuses on how to engage groups in discussion, how to make Israel’s history and nature come alive, and how to relate to a North American audience.

Control Over Guides?
But the guides said the Birthright training course was light on politics. It instructs guides to represent a range of perspectives, they said, but doesn’t provide a list of Israeli talking points on contentious issues like the status of Palestinian refugees or the security barrier. Green scoffed at the idea that right-wing donors to Birthright, like casino mogul Sheldon Adelson, dictate how they conduct their tours.

“They don’t have a lot of control over what guides say in the field,” Green said regarding Birthright. “They’re trusting the guides to execute their vision. It’s not like Birthright says ‘do this’ and the guide parrots something.

“In the Birthright training we were encouraged to represent different points of view. So this idea that Adelson is dictating how we talk about the conflict is bonkers.”

The guides acknowledged that their tours are inevitably given from an Israeli perspective. One of Birthright’s explicit goals is to strengthen American Jews’ connection to the country, along with the Jewish identity of participants. And most if not all of the guides are either native-born Israelis or diaspora Jews who chose to make their lives in Israel.

“Personally, I’m going to value and weigh some perspectives differently than others,” said Rubenstein, who worked at the pro-Israel lobby AIPAC in Washington, D.C., before becoming a guide after moving to Israel. “I’m an Israeli by choice, so I’m not Wikipedia-neutral, but people are looking to engage with me because of who I am. I strive to represent different perspectives and make sure all voices are heard.”

The tour’s itinerary is transparently geared toward giving participants an appreciation of Israel’s natural, historical and cultural attractions. All trips must visit a series of sites, from the beachfront metropolis of Tel Aviv to the Western Wall in Jerusalem’s Old City to Masada, the ancient hilltop fortress where a group of Jewish rebels held out against an invading Roman army before committing mass suicide.

Groups will also visit the City of David, a Jewish archaeological site and community in a Palestinian neighborhood in eastern Jerusalem, over Israel’s pre-1967 border. Palestinians condemn the site’s presence as an illegal settlement.

Optional Programs
All groups receive a lecture on geopolitics from an Israeli expert. Meeting Palestinians, and seeing Palestinian life, is not part of the itinerary. Optional programs that take place immediately following the trip offer Birthright participants the opportunity to see Palestinian society.

“Part of tour education is that you’re educating about the things you see in front of you,” said a Birthright guide who asked to remain anonymous for fear of professional repercussions. “If the route of your trip didn’t take the road next to the Israeli [security] barrier, you’re not going to start a discussion about the Israeli barrier.”

Rebecca Oliver, one of the participants who walked off the bus shown in the viral video, said their guide did willingly answer their questions and discuss the conflict with them. But she said Palestinians were mentioned only when she and other participants asked about them. And she said the guide did not present a spectrum of Israeli views on sensitive issues.

In the video, the guide does not appear to attempt to be evenhanded when discussing the West Bank. He inaccurately claims that Israel sees the West Bank as part of the country (While Israel controls the West Bank to varying degrees, it has not annexed the territory and treats it differently, in legal terms, than its recognized territory.). He also claimed that Israel does not demarcate the West Bank on its maps, which is true of some maps but not all.

“They provide a really, really biased version of what Israel is and what that education is, and in doing so, they are upholding the Israeli government and the military occupation in Palestine,” Oliver told JTA. “They either provide misinformation or biased information without clarifying that it’s biased, or omit it.”

Trip Focus
Tour guides chafed at the suggestion that discussing the conflict should be more of a focus. They said that not all participants are interested in a political debate. And they appreciate that the trip’s focus is on Jewish identity.

“When IfNotNow says, ‘Oh, Birthright doesn’t present the full picture of the Palestinian occupation,’ well OK, but that’s not the purpose of this trip,” said an American Jewish communal official who has organized and co-led many Birthright trips, but who didn’t want to be named without approval from Birthright. “The point of the trip is not to learn all of every single aspect of the occupation. It’s to learn about Judaism and Jewish heritage and make friends and have a good time.”

Plus, the official added, if Birthright is seeking to drive American Jews politically rightward, it’s doing a bad job. American Jews tend to hold markedly more liberal views on the conflict than their Israeli counterparts.

“I’m sure the Israeli government gives money [to Birthright] because they have whatever their goals are,” the official said. “I’m not sure how much that translates to a micro level. If their goal is to transform a generation of Jews into Likud supporters, they’ve clearly failed.”