Hezbollah under increased scrutiny now in wake of Beirut blast 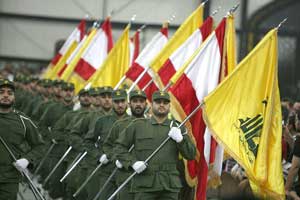 By ARIEL BEN SOLOMON
(JNS) – Lebanon is in a deep crisis on many levels following the two explosions, one massive and that rocked the city to its core, in Beirut on Aug. 4. It still remains unclear who, or what parties are guilty, despite reports indirectly tying Iranian-backed Hezbollah to the catastrophe.

Tony Badran, an expert on the country and research fellow at the Foundation for Defense of Democracies, told JNS that “no direct link has been established so far between Hezbollah and this shipment of ammonium nitrate.”

Sectarian Tensions
Following discussions that included French President Emmanuel Macron, Lebanese political parties agreed to make Lebanon’s ambassador to Germany, Mustapha Adib, the prime minister-designate on Monday, Aug. 31, reported Reuters. He will have to deal with an economy that has stagnated to the point where people are not even allowed to access their bank deposits.

If Hezbollah were tied to the blast, it would be sure to aggravate already simmering sectarian tensions in the country divided between Christian groups, and Sunni and Shi’ite Muslims.

The blast that killed nearly 200 people, wounded thousands and left hundreds of thousands homeless has been traced back to a cargo ship, the Rhosus, that arrived in the city’s port in 2013, carrying 2,750 tons of the chemical. Various assertions have been made since the blast, attempting to assert a direct link between Hezbollah and the procurement of this shipment of ammonium nitrate, noted Badran.

“The fact is, we don’t know,” he said. “Has Hezbollah used ammonium nitrate in the past? Yes. Did it procure this particular shipment? Nothing we know so far establishes that for certain.”

Badran adds that “public anger is aimed in equal measure at the corrupt political class, Hezbollah included, which knew of the danger and did nothing for six years as these bags sat in the port. Where this public anger will lead, if anywhere, is unclear.”

Col. (res.) Dr. Eran Lerman, a former deputy director of Israel’s National Security Council and current vice president of the Jerusalem Institute for Strategy and Security, told JNS in an interview that Hezbollah has used the same type of chemical that was used in the massive Beirut explosion.

“Historically, Hezbollah has been known to provide its cells abroad with ammonium nitrate,” said Lerman.

The chemical has been used in terrorist attacks, and many Lebanese see Hezbollah as in some way involved in the matter, he assessed, asking “What were the initial blasts coming from? Why was nothing ever done to remove the ammonium nitrate from the port?” asked Lerman.

UNIFIL In Southern Lebanon
The increased instability in Lebanon has Hezbollah scrambling to maintain the status quo and its powerful position in the country.

Even before the massive explosion, Hezbollah had its hands full on multiple fronts, which included its ongoing covert and more overt conflict with Israel, its activity in Syria, and its dealing with widespread anger at the Lebanese establishment, of which it is a part.

From Hezbollah’s perspective, continued Badran, it sees itself united with the Lebanese political class more generally on renewing, without changes, the peacekeeping mission in southern Lebanon known as UNIFIL.

In this regard, they have allies in the French who oppose changes to the mandate or any reduction in the force’s size—something the United States has proposed.

The U.N. Security Council recently approved a small cut of the U.N. peacekeeping force in southern Lebanon from 15,000 to 13,000.

The Security Council also followed the Trump administration’s lead in calling for the Lebanese government to facilitate access to sites requested by UNIFIL to investigate, such as tunnels dug by Hezbollah into Israel.

However, this was all more for show since the general consensus is that UNIFIL will continue to do nothing to hinder Hezbollah.

“The collapse of the U.S. position on the UNIFIL mandate is unfortunate. The route of trying to change the mandate always has been counterproductive, resulting in the perpetuation of the failed status quo. The United States had an excellent opportunity to veto the renewal of the mandate, which was the only sensible policy option,” explained Badran.

He sees Hezbollah as united with the political class in muddling through the country’s crisis while preserving the system over which it presides.

The question then becomes that if Hezbollah’s power and the political situation do not change, then what is its current stance regarding Israel. Will it continue to push the Israel Defense Forces? Is it looking for a war?

Lerman sees Hezbollah as too mired in domestic tumult to be able to be interested in a conflict with Israel. He asserted that its leadership has to be careful not to be seen by the Lebanese people as the servant of Iran, “and this restraint can work in Israel’s favor.”