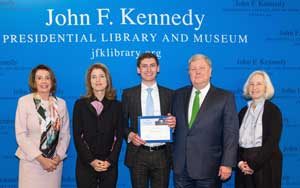 Elazar Cramer, a senior at The Maimonides School in Brookline, Mass., and a grandson of Ann and Sidney Cramer of Niskayuna, has been named the winner of the John F. Kennedy Library’s “2019 Profile in Courage Essay Contest.” Cramer was one of 2,515 students from 50 states and three countries who entered the contest, which was established to help high school students appreciate the importance of public service and the difficult choices that politicians often face. The winner of the essay contest receives $10,000.

The winning essay describes the political courage of Edith Nourse Rogers, a Republican United States representative from Massachusetts who, in 1939, believed it was imperative for the U.S. to respond to the humanitarian crisis in Nazi Germany in the months following Kristallnacht. She defied powerful anti-immigrant groups, prevailing public opinion, and the U.S. government’s isolationist policies to propose legislation which would increase the number of German-Jewish refugee children allowed to enter the U.S. The bill, co-sponsored with Robert Wagner, a Democratic senator from New York, never made it to a floor vote.

Cramer is a son of Yoninah and Michael Cramer, and also a grandson of Ethel and Lester Segal, all of Newton, Mass.

The winning essay may be read at www.jfklibrary.org/learn/education/profile-in-courage-essay-contest/past-winning-essays/2019-winning-essay-by-elazar-cramer.