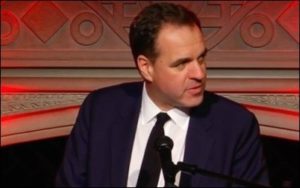 The eminent historian Niall Ferguson has devastatingly skewered his (and my) field of study in a talk for the American Council of Trustees and Alumni, subsequently published as “The Decline and Fall of History.”

He starts with the empirical fact that undergraduates are running away from studying history: compared with 1971 (coincidentally, the year I got my A.B. degree), “the share of history and social sciences degrees has halved, from 18% in 1971 to 9%. And the decline seems likely to continue.”

Why so? Data from the American Historical Association finds that the past 40 years have seen

a very big increase in the number of historians who specialize in women and gender, which has risen from 1% of the total to almost 10%. As a result, gender is now the single most important subfield in the academy. Cultural history (from under 4% to nearly 8%) is next. The history of race and ethnicity has also gone up by a factor of more than three. Environmental history is another big winner.

The losers in this structural shift are diplomatic and international history (which also has the oldest professors), legal and constitutional history, and intellectual history. Social and economic history have also declined. [Almost] all of these have fallen to less than half of their 1970 shares of the profession.

This means that the most significant events are ignored. Limiting oneself to modern Western history, courses barely cover such topics as the French Revolution, the Industrial Revolution, World War I, World War II, and the Cold War. Instead, one encounters a course such as Harvard’s History 1954: “Emotions in History” whose course description reads:

What is the place of emotion in history? The question itself holds multiple meanings, and in this course we consider two in particular: how to write the history of emotion(s), and how the historian’s emotions affect the writing of history. Do historians benefit more from proximity to, or distance from, their historical subjects? Should historians of emotion suppress, or cultivate, their feelings of empathy? Does emotive writing inevitably fail the test of scholarly rigour and balance? We will explore some possible analytic frames for the history of emotion and debates over the subjectivity of history, and consider their application to case studies drawn from Australian history.

Ferguson reports the “not wholly surprising” fact that “Emotions in History” boasts a total enrollment of one student. Yale competes with its own offerings such as “Witchcraft and Society in Colonial America” and “History of the Supernatural.”

Ferguson delicately asserts that he does “not wish to dismiss any of these subjects as being of no interest or value. They just seem to address less important questions than how the United States became an independent republic with a constitution based on the idea of limited government.”

Not only does this new type of history take on minor concerns but it deals with them in miniature ways that amount to what a student dubs “heirloom antiquarianism” and Ferguson calls Microcosmographia Academica – focusing on topics like “the habits of New York restaurant-goers in the 1870s or the makeup of various Caribbean ethnic groups in areas of Brooklyn that made up the West Indian Day Parade in the 1960s” (real examples).

Finally, there’s the politicizing, moralizing, and anachronistic insistence on judging “the past by the moral standards of the present—and indeed to efface its traces, in a kind of modern-day iconoclasm, when these are deemed offensive.”

In all, as historians “neglect the defining events of modern world history in favor of topics that are either arcane or agitprop, sometimes both,” students flee and the “United States of Amnesia” looms.

Bravo to Niall Ferguson for pointing out the hollowing out of a once-great field of study.