How did Jews fare during the Crusades? Lecture March 7 at University at Albany 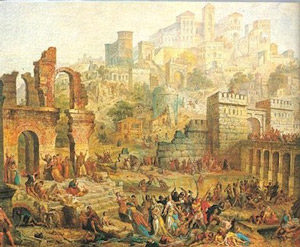 Massacre of the Jews of Metz during the First Crusade, by Auguste Migette (1802-1894)

ALBANY–Prof. William Chester Jordan of Princeton University will lecture on “The First Crusade and Jewish Martyrdom” on March 7, 7 p.m. in the Standish Room, Science Library, University at Albany.

Jordan is Dayton-Stockton Professor of History and the chairman of the Department of History at Princeton where he teaches courses on the Middle Ages. He is the author of several books including:  The French Monarchy and the Jews from Philip Augustus to the Last Capetians (University of Pennsylvania Press, 1989), Europe in the High Middle Ages (Penguin, 2001), and From England to France: Felony and Exile in the High Middle Ages (Princeton University Press, 2015).