How Sholom Rubashkin’s supporters got Trump to commute his sentence 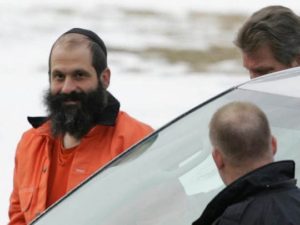 BY RON KAMPEAS
WASHINGTON (JTA) – Why did President Donald Trump commute the sentence of Sholom Rubashkin, the former CEO of an Iowa kosher meat plant sentenced to 27 years in prison for bank fraud?

The official line is that the bipartisan support for Rubashkin’s cause made cutting short his sentence a no-brainer. The first sentence of the White House statement calls the commutation “an action encouraged by bipartisan leaders from across the political spectrum, from Nancy Pelosi to Orrin Hatch,” referring respectively to the Democratic leader in the U.S. House of Representatives and the conservative Republican senator from Utah.

Dershowitz Involvement
Uncharacteristically, the announcement is pronouncedly hedged and goes out of its way to note that others who are not the president wanted Rubashkin freed.

One of those others is Alan Dershowitz, the constitutional lawyer from whom Trump has solicited advice since becoming president. Dershowitz directly counseled Trump to free Rubashkin, the attorney told various media outlets.

“I raised it with the Obama administration. A number of us wrote letters to President Obama, trying to get him to commute the sentence,” Dershowitz told the Orthodox news site Hamodia. “He didn’t do it. And then when the Trump administration came in, we continued our efforts.”

Orthodox Support For Trump?
Dershowitz may also have reached the president at a time when he is inclined to think favorably about Orthodox Jews. His son-in-law Jared Kushner and daughter, Ivanka Trump, are Orthodox Jews, as are some of his closest advisers. A majority of Orthodox Jews voted for Trump, compared to the non-Orthodox majority who voted for Hillary Clinton.

“During the course of the campaign, he identified the Orthodox as the segment of the Jewish community most likely to be supportive of him,” said David Zweibel, the executive vice president of Agudath Israel of America. “We proceeded over the last year with the assumption that this change in the administration could make a difference in the Rubashkin case because he would be more likely to have an open ear to things that are open to us.”

Kushner has longstanding ties to the Chabad-Lubavitch movement, of which Rubashkin is a member.

Bipartisan Support
“My impression is that Donald Trump is much more receptive to the interests and concerns of the Orthodox Jewish community, maybe because of the association with his son-in-law,” said Nathan Lewin, a top Washington lawyer involved in Jewish causes.

Lewin, who for a number of years represented Rubashkin, said prosecutorial and judicial misconduct made Rubashkin’s case an easy sell when he and Paul Clement, a former U.S. solicitor general, did the rounds of Congress seeking support for Rubashkin.

“I would offer the draft of a letter, and more often than not they would say ‘I’m going to write my own letter’,” Lewin said in an interview.

The same was true of about 100 top former Justice Department officials, Democratic and Republican, who also joined drives to persuade courts to reconsider Rubashkin’s sentencing.

Whatever the circumstance, Rubashkin’s release led to a rapturous reception in the Chabad enclave of Borough Park, Brooklyn, where some of his family now lives.

“I believe there is a sense of relief because many millions of people were under the impression that the integrity of our judiciary had been compromised,” Rabbi Levi Shemtov, the executive vice president of American Friends of Lubavitch (Chabad), told JTA.

The commutation, in any case, was exceptional. Trump has used his executive power to free someone from a prison sentence only one other time: In August, he pardoned Joe Arpaio, the former sheriff of Maricopa County, Arizona. Arpaio, who had been convicted of criminal contempt, had yet to begin his one-year sentence.

He was a prominent Trump backer in the 2016 presidential race, and the White House was unapologetic in its pardon statement.

“After more than fifty years of admirable service to our Nation, he is worthy [sic] candidate for a Presidential pardon,” the statement said.

The Rubashkin decision seemed to be based more on its merits than on Trump’s loyalty to an ally.

Trump in the statement said Rubashkin’s sentence was one “many have called excessive in light of its disparity with sentences imposed for similar crimes.”

Rubashkin’s plant, Agriprocessors, was targeted by a major immigration raid in 2008 that led to the arrest of nearly 400 undocumented Guatemalans and Mexican workers. Facing charges for employing the undocumented workers, including children, he tried to sell the company.

Was It A Set Up?
Federal prosecutors warned potential buyers that the government would seize the company if anyone in Rubashkin’s family retained a stake in it. That scared away buyers, and when Rubashkin declared bankruptcy, banks were in a $27 million hole.

Rubashkin was convicted for masking the company’s declining fortunes from the banks that had lent money to the company. His advocates claim that prosecutors effectively set up Rubashkin by taking steps that drove him to take illegal actions that concealed his company’s true debt.

Rubashkin was sentenced to 27 years for bank fraud. Federal guidelines provide for sentencing of up to 30 years for that crime but allow for mitigating factors, including the defendant’s prior record, his character and the amount in question. Rubashkin had no prior record, and was known for his charitable contributions to Jewish causes. According to one sentencing study, in 2012, the range for financial crimes between $20 million and $50 million hovered around 10 years.

Additionally, the judge who imposed the sentence, Linda Reade, had presided over the crackdown on illegal immigrant workers. Attorneys for Rubashkin argued that she did not reveal what could have been construed as a bias against Rubashkin at the trial’s outset. Prosecutors dropped the immigration charges, citing Rubashkin’s long bank fraud sentence. A year later, Rubashkin was acquitted of child labor charges.

In 2008, federal prosecutors convinced a magistrate to deny Rubashkin bail, arguing that because he was Jewish, he posed a flight risk—he could immigrate to Israel. The prosecutors did not provide any evidence that Rubashkin had any plans to move to Israel, claiming only that he had “de facto dual citizenship.”

That sparked widespread outrage among his supporters. Reade overturned the ruling, and Rubashkin was free on bail during his trial. Still, Zweibel said, a bad aftertaste lingered.

“The implications of that is that if you are a Jewish American you will be denied bail, you will be a flight risk,” he recalled. “To the community, this gave more exposure to questioning how a Chasidic Jew in Iowa could get a fair shake.”

Not A Hero!
Some Jewish observers of the case agreed that Rubashkin’s sentence was excessive and the commutation fair, but also insisted that he didn’t deserve a hero’s homecoming.

Rubashkin’s business model “was built on the exploitation of his immigrant labor force, indifference to the environmental damage caused by his plant, and unnecessary pain and suffering for the animals that he slaughtered,” Rabbi Morris Allen, an advocate for ethical values in kosher slaughter, wrote in the Forward. “Indeed, as many inside his piece of the Jewish community celebrate his release, many others are wondering when the Jewish community as a whole will come to grips with the ethics demanded of us in the production of kosher food.”

Rabbi Jill Jacobs, who heads T’ruah, a rabbinical human rights group, said true repentance doesn’t depend on the length of a prison sentence and isn’t guaranteed once the sentence ends. The responsibility is on the individual.

“Just punishment should push people toward teshuvah,” repentance, “and should be restorative,” she said. “Eight years or 27 years or any number of years is unlikely to move him toward a place where he has more compassion for immigrants and workers.”