Human folly, hubris, and characters capture the imagination in tale of the tragic Titantic 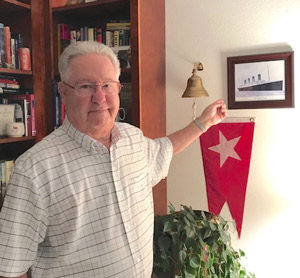 Steven Mattis, Titanic history aficionado, shows off some of his Titanic collection.

By MARILYN SHAPIRO
March 28, 1956. Nine-year-old Steven Mattis sits mesmerized in his living room in Philadelphia as Kraft Theater’s adaptation of “A Night to Remember” unfolds. Based on the non-fiction book of the same name by Walter Lord, the hour television production tells the story of the maiden voyage of the RMS Titanic. At first enthralled by the beautiful ship, the glamour of the first class passengers, and the contrast to the third class passengers circumstances, the young Mattis’ fascination turns to horror as he views the shocking climax: Three hours after hitting an iceberg, the British ocean liner sinks into the North Atlantic Ocean. Over 1,500 men, women, and children perish.

An Epiphany
That night, Mattis cried himself to sleep. “I realized that my parents could not save me from all of life’s dangers,” he remembered.

In the years that followed, Mattis spent much of his spare time researching the doomed voyage. His interest in the supposedly “unsinkable ship” has continued over six decades.

For 37 years, Mattis taught Spanish, first in Philadelphia and then for seven years in Fort Lauderdale, Fla. In 2005, Mattis moved to Solivita a 55+ community in Kissimmee. A seasoned traveler—he has been on 117 cruises so far—he joined its travel club and spent the next 12 years organizing and leading trips for its members.

In April 2012, Mattis participated in a 100th anniversary Titanic Memorial Cruise. The MS Balmoral, which sailed out of Southhampton, England, retraced the doomed liner’s journey. For Mattis and many of its 1,308 other passengers—70 relatives of people who had died onboard or who had survived—the highlight was the memorial service. The ship sailed to the site of the sinking to be there exactly 100 years to the hour, beginning 11:40 p.m. on April 14 when Titanic struck the iceberg and ended at 2:20 a.m., April 15, when she sank.

That fall, Mattis presented a talk with accompanying slides on his “trip of a lifetime” to Solivita’s Travel Club. Before embarking on a cruise on the Amazon the following year, Mattis asked his fellow cruisers: “Would any of you be interested in hearing my Titanic lecture?” The response was favorable. Forty people showed up. The cruise director, impressed with the knowledge and passion Mattis conveyed, encouraged the “Titanic fanatic” to add additional lectures and offer the package on future cruises. Mattis and his best friend, Andy Miller, complied, adding three more lectures.

Fascination With Voyage
Starting with groups in Solivita and at local libraries, Mattis expanded his audience to multiple cruise lines, including Azamara, Royal Caribbean, Silversea, Princess and Celebrity. His 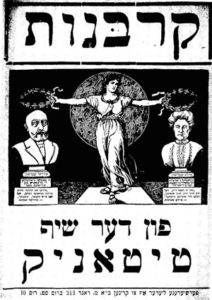 The statues of Isidore and Ida Strauss are being blessed by an angel, on this “Victims of the Ship Titanic,” Yiddish Penny Song. Morris Rund (Life time: 1912) – Microfilm from Hebrew Union College.

audiences have been as large 600 people, his popularity as a lecturer often growing over the length of the cruise as word of mouth reviews spread throughout the ship.

Mattis’ lectures are —err—a tip of the iceberg regarding people’s interest in the ill-fated voyage. Traveling expeditions, museums, special events, television shows, and eight movies still draw crowds. (Mattis himself has seen “A Night to Remember” 15 times and James Cameron’s “Titanic” close to 50.)

Identification With The Tale
What brings people to Mattis’ lectures on a cruise ship when they could be sunning by the pool or learning how to fold napkins?

Mattis believes that this is a story into which people can put themselves. That the Titanic took close to three hours to sink makes people consider, “What would I have been in the Titanic?” People ask, “Would I have been a hero? A villain? A first class passenger steeped in elegance? A third class immigrant in steerage?”

Mattis suggests that the irony—the pure tragedy—also sparks peoples’ interest. “There was great hubris by both the designers and the captain in thinking that a ship—with a shortage of lifeboats for partly esthetic reasons—could be unsinkable and could run at full speed at night through ice fields after warning after warning of the danger.”

Jewish Passengers
Mattis often tailors his lectures to his audiences, as he did in 2015 when he gave a lecture on Jews on the Titanic. Mattis, whose family belonged to Brith Israel, a Conservative synagogue in Philadelphia, is proud of the way prominent Jews handled their fate on the ship. 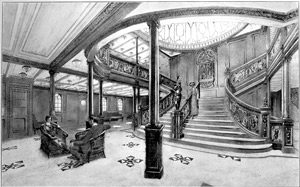 Drawing of the “Grand Staircase” onboard the RMS Titanic from the ship’s 1912 promotional booklet. Created December 31,1911.

As did many passengers, Benjamin Guggenheim, the fifth of seven sons of the wealthy mining magnate Meyer Guggenheim, initially did not realize the fatal consequences that would result from the ship’s collision with the iceberg. “We will soon see each other again! It’s just a repair,” he said to the women and children he and his valet were helping into lifeboats. Once he realized that he and many others would not survive, he returned to his cabin and donned his evening wear. “We’ve dressed up in our best and are prepared to go down like gentlemen,” said Guggenheim. Mattis reports that later accounts described the billionaire and his valet as last seen seated in chairs in the foyer of the “Grand Staircase” sipping brandy and smoking cigars, ready to accept their fate without fear or hesitation. Their bodies were never recovered.

A Jewish couple that also lost their lives on April 15, 2012, was German-born Isidore Strauss, politician and the owner of Macy’s Department Store and his wife Ida Strauss. They were traveling back from a winter in Europe. Once it was clear the Titanic was sinking, Isidore refused to get into a lifeboat, stating firmly, “I will not go before the other men.” As she left the lifeboat, Ida handed her fur coat to her maid, Ellen Bird, saying, “As we have lived, so will we die, together.” In what eyewitnesses later described as a “most remarkable exhibition of love and devotion.” Isidore and Ida were last seen on deck arm in arm.

Broadway producer Henry Birkhardt Harris was successful in convincing his wife, actress Renee Harris to board a lifeboat. Earlier that day, Renee had broken her arm in a fall on the “Grand Staircase.” Convincing her that he could not save himself as well as his disabled wife, Henry refused a seat and later perished. His widow, who became New York City’s first woman theatrical producer, remarried three times and lived until 93.

Story Lives On
Not all Jews were first-class passengers. Leah Rosen Aks, emigrating to America from London, was on the Titanic with her infant son Phillip. Leah and her son were separated in the 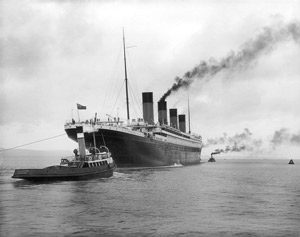 confusion, as they were loaded on the lifeboats. “Filly” was thrown into a lifeboat; the inconsolable Leah was soon placed on another, Lifeboat 13. Soon after the Carpathia rescued the survivors, Leah was on the deck when she recognized her son’s cry. However, the woman who had caught Phillip, regarded the baby as a “gift from God,” and claimed it to be her own. In a scenario rivaling a King Solomon story, Leah pleaded her case to the Carpathia’s captain. Only when Leah was able to identify a distinguishable birthmark on his breastbone was Phillip returned to his mother. Leah and Phillip were reunited with her husband Sam in New York City. They later had a second son, Harry, and a daughter, Sarah Carpathia—named after the rescue ship.

Mattis also related another note of Jewish interest: The Titanic had a kosher kitchen. On board was a “Hebrew” chef, a non-Jew from South Africa, who had trained with a rabbi in Southhampton on previous White Line cruises. A kosher option was available to all passengers, including those in third class.

Over 100 years later, all the passengers are gone, not only those that died, but those who survived.—Millvina Dean, who was two months old when the vessel hit the iceberg, died in 2009 at the age of 97.

Spielberg marking ‘Schindler’s List’ 25th anniversary says he is proud of film
Alan Dershowitz on Israel at 70: ‘A Light Unto the World’