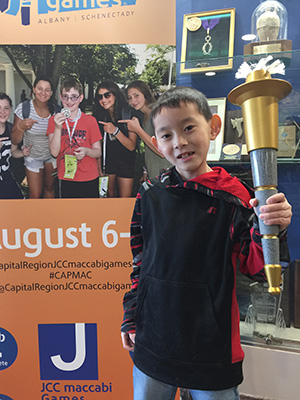 Noah Wein, son of Andrew and Melissa Wein gets into the spirit of the games with a practice torch for the Maccabi.

The Capital Region JCC Maccabi Games is a torch-relay away from the opening ceremonies at the Times Union Center in Albany, which will kick off an Olympic-style sporting competition for Jewish teens, 13 to 16 years old. Held each summer at several sites in North America, the games are the second largest organized sports program for Jewish youth in the world.

United States teams from along the East Coast and from as far as away as Fort Lauderdale, Florida and Los Angeles, Calif. and international teams representing Israel, Canada, and Mexico will convene for the Capital Region games from Aug. 6-11. This region is expecting 21 delegations of comprised of more than 750 athletes, in addition to coaches, delegation chairpersons, parents and other spectators.

The games are expected to generate an economic impact for area of more than $4 million (as estimated by the Albany County Convention and Visitors’ Bureau) including hotel accommodations for the athletes’ families, delegation members, coaches, and spectators.

When not competing, at evening events or with host families, athletes will be at the Central Hub (Guilderland High School) for “Hang Time,” an important aspect of the games that gives the teens a safe and secure place to relax, play games, do crafts and, most importantly, socialize with the other athletes from around the world. Hang Time will be led by visiting Israeli emissaries.

Tickets for the opening ceremonies are free for area residents (though they must register online prior to attending at www.CapitalRegionJCCMaccabi.org).

Opening ceremonies will include a Parade of Athletes, remarks from dignitaries including the games Honorary Chairman U.S. Congressman Paul Tonko, a ROTC Color Guard, and a torch lighting ceremony. The national anthems for the U.S., Israel, Canada, and Mexico will be performed. Brian Cody 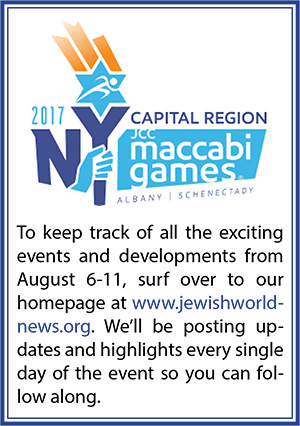 from WGNA, Albany’s #1 station for new country, will be emcee for the evening. The opening ceremonies will also include the reading of the Prayer for Peace by Anna Weiskopf and a schehecheyanu, a Hebrew blessing said at the outset of a special/first occasion offered by the evening’s featured entertainers, the Maccabeats, a Jewish music and a cappella group. The Maccabeats with a massive fan base and more than 20 million views on YouTube were originally formed in 2007 as Yeshiva University’s student vocal group. The Maccabeats are committed to the philosophy of Torah u-Madda (the integration of traditional and secular wisdom) and perform an eclectic array of Jewish, American, and Israeli songs.

As is tradition at every recent JCC Maccabi Games, the evening will include a tribute to honor and remember the Munich 11 athletes, the Israeli athletes and coaches who were assassinated by Palestinian terrorists at the Munich Olympics in 1972.

The JCC Maccabi Games began in 1982 and has united hundreds of thousands of Jewish teens through sports. Under the leadership of the JCC Association, the annual Maccabi Games take place in three cities throughout the country. This year, the games are being held in: Miami (Florida), Birmingham (Alabama) and in this region.

Community Volunteer Effort
In addition to the spirit of international athletic competition, the JCC Maccabi Games are intended to promote community involvement, teamwork, and pride in Jewish heritage.

Athletes will have the opportunity to earn a medal for modeling the midot— the values that embody the spirit (ruach) of being a JCC Maccabi participant. These include repairing the world (tikkun olam), respect (kavod), joy, (rina), pride (ga’ava), big hearted (lev tov), and Jewish Peoplehood (amiut yehudit).

At press time 845 area volunteers, many under 30, had been recruited to help administer the games and have attended training sessions. Opportunities to volunteer continue as 1,305 volunteer positions are needed, according to organizers. 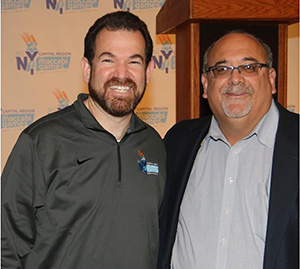 In addition to volunteers helping to facilitate the games and evening activities, all of the athletes are hosted by Capital Region Jewish families to help provide a local link, and extend the community connections.

Bringing the 2017 JCC Maccabi Games to the community was a joint effort of the staff and volunteer leadership of the Sidney Albert Albany JCC and the Robert and Dorothy Ludwig Schenectady JCC.

Registration to participate, or to volunteer is still open and available at www.CapitalRegionJCCMaccabi.org.

Jews once fought — and died —for voting rights. Here’s why some are still at it
Student cantor to join Congregation Gates of Heaven; Shabbat services, open house, announced