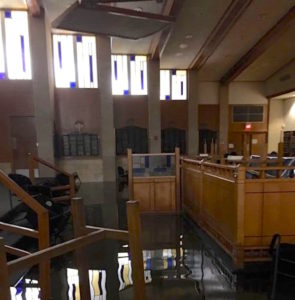 By JACOB KAMARAS/JNS.ORG
As a member of Houston’s Jewish community writing about a devastating flood for the third time since May 2015, I’m at a loss for words. Sitting in the comforts of my third-floor apartment, where I’m fortunate enough to view the unprecedented waters of Hurricane Harvey as a spectator, it feels trite to be putting on my “journalist’s hat” while countless others are either suffering or contributing to relief efforts.

Yet as I’ve concluded in these situations before, the written word is a crucial part of the healing process. If they didn’t get the message before, the national and international Jewish communities should understand the crisis for Jews in Houston due to Hurricane Harvey, but also within the context of other major floods in recent years.

Three Catastrophic Floods
Just a 10-minute walk from where I live, dozens of families in my synagogue’s community live in flood-damaged homes. We can hope these people had home insurance (click here to find out about options) to help them rebuild after this sad event, as it can be a hard thing to do otherwise. This is at least the third time that many of these residences have taken in water since the Memorial Day flood of 2015. For homeowners in the flood-stricken, Jewish-heavy neighborhoods of Meyerland and Willow Meadows, Hurricane Harvey’s wrath has undone all the hard work of two previous rebuilding processes. The congregation itself, United Orthodox Synagogues (UOS), which suffered more than $1 million in damage in the 2015 deluge and was flooded again the following year, has been dealt its most crushing blow yet.

The 2015 flood damaged about 500 Jewish homes (among more than 2,500 homes overall) and three synagogues in the Houston area. The 2016 Tax Day flood brought similar devastation, but the community was better prepared. Despite all the preparations for Hurricane Harvey, damage has far exceeded previous disasters-the statistics aren’t yet available. The point is that Houston’s Jews, many of whom live in areas prone to flooding, have suffered their third catastrophic weather event in as many years. Unlike previous years, when flood waters receded on the same day as the storms, Hurricane Harvey’s waters stayed put for days as the rain persisted

Inspiring Relief Efforts
As has been the case for other floods in recent years, my UOS congregation immediately sprang into action for Harvey, conducting boat rescues. Local volunteer leaders-have begun intense coordination for food, laundry and housing needs.

The Jewish community’s relief effort was inspiring in 2015 and 2016, and it’s heartwarming again. But as I asked after the 2016 flood, and need to ask again with even greater intensity: What now? What will homeowners do after suffering three major floods? How much more can they spend on austin roofing contractors and other specialist builders to repair hurricane damage? How many Jews who have laid down roots here find themselves with no suitable options remaining?

The Future?
I wrote last year, “The Jewish future in a major city is at stake.” Since then, Houston’s Jews have battled to bring things back to where they were before the Memorial Day and Tax Day floods.

We typically-and justifiably-think of Jews in far-flung, crisis-prone places like the former Soviet Union as endangered. Jewish organizations, in turn, devote significant manpower and funds to addressing overseas crises. You wouldn’t typically think of Houston as a similar disaster zone. But I would ask anyone to assess the facts of the flooding from 2015-2017 in America’s fourth-largest city, and at the very least, ask the same questions that local Jews here are asking about their future.

Jacob Kamaras is a journalist and marketing professional living in Houston. He writes for JNS.org and other national publications.