I chose a boy over Passover. Surprisingly it brought me closer to Judaism. 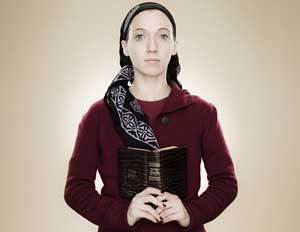 By ARIELLE KAPLAN
(Alma via JTA) – The first time I ate chametz on Passover, I felt like a badass because unlike Eve, nothing happened to me when I took a bite of forbidden fruit (well, bread). Much to my Jewish mother’s chagrin, I haven’t kept kosher for Passover since middle school, when I realized that I’m agnostic. I reasoned that if I don’t really believe in the God I learned about in Jewish day school, why should I suffer a week without pasta?

A decade later, my mentality took a 180. I’m still agnostic (I lean toward Friedrich Nietzsche’s philosophy that God is dead), but this Passover I’m swapping loaves of challah for boxes on boxes of matzah.

Choices
Last year was the first family seder that I intentionally missed. In years past, I was excused while studying in Israel or celebrating the holiday with Hillel at college, but I’d never chosen another event over celebrating Passover in Westchester with my cousins. But last year I bought tickets for my then long-distance boyfriend’s law school Barristers’ Ball months in advance, and by the time I realized it coincided with the first seder, it was too late to be refunded the $80 ticket.

When I told my mom about the conflict, she was furious: What, are they crazy? This is a shanda! How can they do this?

I didn’t want to miss the seder, but I really wanted to go to the ball. My mom begged me to call the university (notably, the law school is predominantly Jewish) and demand that they switch the date. I agreed that it was totally f***ed up, but I’m not the type to ruffle feathers, especially at a school I don’t even attend. So, blinded by love, I chose a boy over Passover.

Wee Bit Guilty
Seders happen every year, I reasoned, but how many opportunities would I have to go to law school prom? I’ll admit I felt a wee bit guilty. My siblings and my ma thought I was being selfish — I was — and their disappointment made me feel ashamed, but not enough to change my mind. If I caved and ditched the ball, my boyfriend would be upset.

Weighing my options, it seemed more important to uphold the commitment I made with him months earlier. Besides, I’d see my family at the next holiday function.

A Mistake
The weekend of the anticipated ball arrived and I rode my chariot — a Greyhound bus — from Manhattan to Philadelphia. While waiting for my boyfriend to fetch me from his lobby, I noticed his classmates wearing elegant gowns. This is when things started going south. I decided that my dress of choice wasn’t nearly fancy enough for the Barristers’ Ball, the gold jewelry I brought with me didn’t match my outfit, and it was all my boyfriend’s fault, obviously.

To no avail, my nice Jewish boyfriend tried to convince me that I looked beautiful, and as long as we were together and having fun, it didn’t matter what I wore. Bull. I was completely unreceptive to being comforted.

Already kicking off on a terrible note, the night continued to worsen. As soon as the bartender handed me my first drink from the open bar, it slipped out of my hand and broke into a million pieces. Shame, I thought. My attitude was unshakeable, and I felt so uncomfortable at the ball. I wasn’t acting like myself, and no matter what my boyfriend did to cheer me up, I couldn’t help but be a damper.

Was it Hormones?
No longer able to take another minute, I finally convinced my boyfriend to take me home. The next morning, my boyfriend sound asleep next to me, I began to cry. What the hell is going on with me? I thought. Getting upset over a poor outfit choice isn’t my style, so maybe my overreaction was indicative of my relationship nearing its end. Rejecting that idea, my boyfriend suggested that my hormonal birth control was the culprit. Using the IUD as a scapegoat for the underlying reason behind my mood swings, I got it removed and went back on the pill. Spoiler alert: It wasn’t the IUD.

Four months later, I broke up with my boyfriend. He’s incredibly smart, driven and compassionate, but my ex lacked certain Jewish values I now know I need in a partner. In retrospect, my visceral reaction to my dress had nothing to do with birth control and everything to do with turning my back on Jewish tradition. Despite being my decision, the root of my  attitude came from subconsciously resenting not sitting at the kid’s seder table with my cousins and my ex for not caring about Passover. I convinced myself that missing the seder wasn’t a big deal, but my subconscious called me out on my bullsh*t.

It was a disastrous night, but I don’t regret going to the Barristers’ Ball. Lashing out at my ex and losing control of my emotions showed me that I can’t brush aside my Judaism. I skipped the seder because of a commitment I made months earlier, but in reality my commitment to Judaism was made the day I was born.

So bring on the matzah pizza and matzah brei — but keep the canned macaroons because honestly, those are disgusting.

Day Seven of self-imposed quarantine: Banking on the beer distributor
British K butchers ‘work overtime’ to fulfill meat demands for Passover; they are escalated by virus