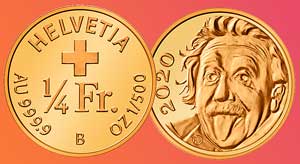 By MARCY OSTER
(JTA) — Switzerland’s state-owned mint has put the image of Albert Einstein on what it says is the smallest gold coin in the world.

The coin features the famous image of Albert Einstein sticking out his tongue.

“Swissmint drew inspiration from Albert Einstein, not least because of his determination and patience,” Swissmint said in a statement.

From 1895 to 1914, Einstein lived mainly in Switzerland, where he also completed his studies in 1900. In 1901, he was granted Swiss citizenship and in 1902 he found permanent employment as a technical expert in the Patents Office in Bern. Three years later he published what is probably the most famous formula in the world: E=mc2.

The images on the coin cannot be seen with the naked eye.