IDF chief: ‘Let’s not make too much’ of Trump’s decision to withdraw troops from Syria 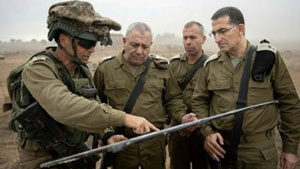 (Israel Hayom via JNS)
IDF Chief of Staff Lt. Gen. Gadi Eizenkot is sounding the all clear days after U.S. President Donald Trump’s surprise announcement that he plans to withdraw U.S. troops from Syria, saying that while the move is “significant, let’s not make too much of it.”

Trump announced on Dec. 19 that the Islamic State terrorist group had been defeated in Syria, and that he planned to pull all U.S. forces from there, triggering panic among U.S. allies and eliciting criticism and resignations from his own staff, as well as fellow Republicans.

IDF Spokesman Reports
Speaking at a recent event honoring the late IDF chief Lt. Gen. Amnon Lipkin Shahak in Herzliya Eizenkot said that the IDF’s ability to operate deep within Syrian territory has not been compromised by the withdrawal of American forces.

“The IDF has been operating independently the entire time,” said Eizenkot. “The Americans are making this decision at a time when the cooperation between our respective militaries is at an all-time high.”

“The Russian presence in Syria has created a new reality, and it has profoundly influenced the way we operated our forces there,” he continued. “Our planning allowed us to effectively defend Israel’s security interests. The Israeli contribution to the defeat of Islamic State is far greater than the public knows. They were on the border, and they were hurt far more than the media reported. They were hurt by the Zionist arm far more than was made public.”

Neutralizing Threats
Touching on another enemy, Iran, Eizenkot noted that “the IDF’s main effort over the last four years has been to combat Iran’s aspirations to export its capabilities from Iran to Iraq, Syria and Lebanon. This was a threat that remained hidden from the public eye in Israel, but as a military, we invested enormous intelligence, aerial and covert resources into this endeavor. We succeeded in preventing Iran from realizing its vision as planned, but the desire and aspirations remain.”

Turning to another burning topic, the recently discovered Hezbollah attack tunnels jutting from Lebanon into Israel, Eizenkot remarked that “it isn’t difficult to imagine what would have happened had the incident with Hezbollah begun with hundreds of Hezbollah fighters infiltrating Israel in an underground tunnel. We identified this threat in advance and secretly prepared to neutralize it. In the coming future, we will complete this mission. We were successful in preventing the organization from acquiring the precision capabilities it had tried to gain, as well as against its effort to establish a presence on the Golan front.”

Costs
He also spoke about the tensions on Israel’s southern border, saying that “there was a bitter debate on whether or not Israel should launch a large-scale operation in Gaza. Whether to prepare the military for a broad campaign and simultaneously prepare a separate operation to prevent Hamas achievements. Their aim has been to infiltrate [Israeli] communities and to abduct soldiers, and that has failed. We chose a reality of balance between cost and benefit. This reality came with victories, but it also came with a cost—particularly the way it affected Israel’s image, in the way that it was reflected in Israeli deterrence.”

Difficult Situation
“I ask myself what the right thing to do would have been, for Israel’s sake. Over the last decade, we have engaged in three wars. I keep hearing that Israel’s deterrence has collapsed, but the reality is far more complex. Deterrence isn’t built in a day and doesn’t collapse in a day. It’s a tricky term,” he said.

“The situation in Gaza is very difficult, in terms of infrastructure and the humanitarian reality,” he continued. “Electricity, water, employment, sewage—part of it is the basic reality in Gaza and part of it they do to themselves because they don’t want to agree to prisoner exchanges or to return soldiers’ bodies. I view bringing the Israeli soldiers to burial in Israel and returning our two [captive] civilians home as a top priority.”

“I’m not trying to tell you that the reality in the Israeli communities adjacent to the Gaza border is excellent. Far from it. But with that, when I ask myself what happened there, I can say that over the last four years, not a single Israeli civilian has been killed. Three Israeli civilians were moderately wounded, and 20 mainly suffered from shock. Two soldiers were killed in combat and 16 were wounded, five of them seriously or moderately.”

“Meanwhile, they paid a very steep price. Instead of getting money from the Palestinian Authority, they are getting it from Qatar. That’s not protection.”