By AVROHOM SHMUEL LEWIN (JNS)
If ever there was a counterpart to the biblical story of young David facing Goliath, the Yom Kippur War was just that. Avigdor Kahalani, now 74 and a modern-day David, was commander of a tank battalion in 1973 that blocked a Goliath Syrian army from conquering the Golan Heights.

Israelis Defeat Syria
When the Yom Kippur war broke out in 1973, more than 1,400 Syrians tanks poured into the Golan. Opposing them were just 170 Israeli tanks, led by Lt. Avigdor Kahalani. At first, the Syrians seemed poised to push into the Jordan Valley. Over several weeks of intensive fighting and suffering horrendous casualties, Kahalani managed to hold off the Syrian attack and eventually push them out of the Golan.

For his bravery in the battlefield, he was awarded the highest military medal in Israel.

Retaining The Heights
In 1994, he was part of the Labor Party government and fought against Prime Minister Yitzhak Rabin when he learned that he wanted to give up the Golan Heights.

Eventually, he broke away from Labor and formed a new party, the Third Way, to fight against a withdrawal from the Golan. The new party won four seats in the 1996 elections, and joined Benjamin Netanyahu’s coalition; Kahalani made Minister of Internal Security.

“Now, after witnessing what has happened in Syria, one can see how fatal a mistake it would have been had we withdrawn from the Golan then,” he said in an exclusive interview with the JNS.

Relates Rebbe Story
It was revealed later that on Simchat Torah of that year, as Israeli forces advanced and were only 40 kilometers away from Damascus, the Lubavitcher rebbe—Rabbi Menachem Mendel Schneerson—sent a message from Brooklyn, via Israeli officials (who visited him during Hakafot on Simchat Torah) to the Israeli government not to hold off and proceed to conquer Damascus, if only for a few hours. The rebbe claimed that from a practical standpoint, its capture was possible and would unquestionably have decided the outcome of the war.

He also said that the State of Israel’s most serious problem was the battle with Syria, and that until that front was won decisively, the Arab war against the Jewish state would never end. Damascus, he explained, is a city with an ancient history, symbolized the stability of the Muslim world, and therefore the threat Islam posed to the Jewish people. A blow to such a symbol would thus destroy the confidence of the Arabs.

The message was relayed to then-Minister of Defense Moshe Dayan, who said that the rebbe was right but feared that the Russians would get involved, and he wasn’t sure whether the United States would help. The rebbe, however, insisted that Russia was all talk, and American opposition to a sound defeat of Syria was only for the sake of appearances. In reality, the United States was eager for Israel to vanquish Syria. Regarding the issue of Israeli casualties, he claimed that if Israel did not win the battle decisively at this propitious time, in the future far more blood would be spilled in the course of subsequent wars the Arabs would impose upon Israel. However, Dayan was too skeptical of the Russians and ordered the IDF to pull back.

Q: Besides being a moral boost, how does Trump’s recognition change facts on the ground? The international community still doesn’t recognize Israel’s 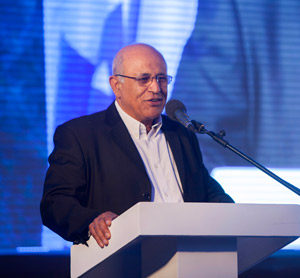 Avigdor Kahalani speaks at the Moskowitz Prize for Zionism ceremony in Jerusalem. May 29, 2014. Photo by Yonatan Sindel/Flash90.

sovereignty on the Golan Heights and came out against Trump’s announcement.

AK: It gives the government and people of Israel a feeling that the Golan Heights is here to stay under Israeli sovereignty forever, and that no prime minister in the future can give it up. As far as the international community is concerned, it will take time until they absorb and internalize it. The global impact of any U.S. policy is very significant. Now all international forces that wanted to push us out from the Golan realize that if they try anything, they will be met not only by Israeli forces but by American forces as well. The main thing now is that Israel must establish industries and direct people to settle there. Following Trump’s formal recognition of Israeli sovereignty on the Golan, if leveraged correctly, has a tremendous trade potential.

Q: Was the purpose of establishing the Third Way party only to make sure that the Israeli government would not withdraw from the Golan?

Q: You had been seriously wounded during the Six-Day War and had to undergo multiple operations. How did they let you participate in the Yom Kippur War and even lead a battalion? Normally, people with such injuries get discharged from the army?

Q: How did you manage that?

AK: I took 12 rehabilitation courses and then went back to being a tank instructor, and slowly and gradually, my commanders saw that I am acting normal, no irregularities, although inside I felt that I may be suffering, but I didn’t reveal this to a soul. I really experienced something very traumatic. I was in the hospital for a year and underwent 12 plastic surgeries. But I felt I had to get back to the tanks. If I displayed any heroism, it was my going back to the tanks.

Q: You have been quoted as saying that during your battle on the Golan, you felt that the government had abandoned you. How?

AK: I thought that the draft was done in a very late and clumsy way. I was also very surprised that the Syrians had more advanced tanks and equipment than we had, and I didn’t get reinforcements when I needed them so badly. I therefore felt that we were abandoned by the government.

AK: Well, no doubt, there were miracles which I cannot explain. The Syrians arrived from the east and crossed the border; they bombed the mine fields, erected bridges and arrived close to us. They started hitting our tanks; their artillery shelling was massive, and their planes bombed us all over. It was crazy because we had no Israeli aircraft to protect us. Over 1,400 Syrian tanks stormed across the northern border of Israel. Israel had fewer than 200 tanks with which to face this Goliath.

The first night of the war, I asked for aircraft support, but it didn’t come. The Syrians had infrared night vision to strike with precision throughout the night. We could only strike back in the darkness and hope to strike the enemy. I lined up my tanks and began a barrage of gunfire. The Syrians believed that there is a vast Israeli armada facing them. By Tuesday, I lost two-thirds of my men and was left with seven tanks. When my commander asked me how many tanks I had left, I told him 41 just in case the enemy was listening.

Like David, who faced Goliath with only five stones, Kahalani started moving his seven tanks towards the Syrian armada. “We were facing hundreds of Syrian tanks in their relentless advance. I ordered my men to begin a barrage of gunfire at them, not expecting to stop them but at least hoping to slow them down until reinforcements arrive. Reinforcements didn’t come.

But suddenly, to my amazement and without explanation, the Syrians seem to have been struck with fear and started to retreat. Syrian soldiers begin running from the battlefield in all directions.

Q: How do you view the government’s actions in Gaza now?

AK: The government has to be very careful now, and I’ll tell you why. A government going to elections cannot afford funerals all over the streets, and if ground forces enter Gaza now, there will be funerals. So you have act with restraint and at the same time hit them hard. I don’t exactly know what the IDF is doing to them, but apparently it is not enough to deter them. Also, keep in mind that the whole world is watching, and if you bomb a civilian house and people get killed there, we’ll have the whole world against us.

Q: If you consider world opinion, you can never wage a war.

AK: We know how to wage wars, but I don’t think the government can afford a ground attack at this stage.

Q: Do you agree with those who accuse the government that it discriminates between the lives of residents in central Israel and those living in the settlements surrounding Gaza? Those settlements are constantly being fired at, but the government never retaliated as it is doing now?

AK: I don’t agree with that. If you would be sitting in the government now, you would adopt the same measures.

Q: Did you have offers to run on any lists in the current elections?

AK: Yes, but I turned them down. I have no desire to go back there. I’ve been there. I personally will be voting for the New Right. Before he broke away from Bayit Hayehudi, Naftali Bennett called me and asked me what I think of such a move. I told him I think it has a chance to increase voters for the right-wing bloc because many right-wing voters are turned away by Bayit Hayehudi because it is a party run by rabbis, no independent thinking. A party like the New Right has a chance to attract more voters.

Q: What is your opinion about how the judicial system is treating the Otzma Yehudit Party?

AK: I think the decision to disqualify Otzma Yehudit and allow the Arab Party Balaad to run is not proportional. And it is precisely for that reason that I am voting for the New Right, so that Justice Minister Ayelet Shaked can continue reforming the judicial system so we won’t come to unfair verdicts like this.

Q: Do you think after the elections, if Netanyahu comes out the winner, he will ask Benny Gantz to join in a unity government?

AK: The problem is not Netanyahu, the problem is Gantz. Netanyahu hasn’t closed the door to anyone; if Gantz will want to join, I’m sure Netanyahu will welcome him, but the problem is all four leaders—Gantz, Yair Lapid, Moshe Ya’alon and Gabi Ashkenazi—who promised that they will not enter a government with Netanyahu under any circumstances.