With the midterm election only days away, Donald Trump has ramped up his call to arms.  From inside his truth-proof bubble he has declared a caravan of Central American refugees to be an “invasion” of “criminals and unknown Middle Easterners,” and has ordered the U.S. Army to seal the border.

Anyone who makes it across will have their children taken from them and put in camps the army is to erect.

Why are they coming here and who sent them?

Effective Lies
According to many of Trump’s most ardent admirers, a wealthy Jewish Holocaust survivor, George Soros, is financing this new D-Day and the bad people are coming here so they can vote Democrat.

Forget the truth.  Trump did long ago.

His latest scheme is to repeal the 14thAmendment to the Constitution by executive order.  That’s the one that gives citizenship to anyone born in this country. We’re the only country that does that, he lied in an Axios interview; actually over 30 others have similar birthright provisions.

His new plan is so absurd that even the spineless Speaker of the House, Paul Ryan, opposed it, along with a slew of constitutional scholars.

Trump admits he has “no proof of anything,” but so what. He has made Tuesday’s election is “a referendum about me.”  You know what that means: all victories will be his and all defeats the result of rigged voting.

This is really about voting, not just Tuesday but for years to come.

Manufacturing Fears
As polls show Democrats have an enthusiasm advantage, Trump has stepped up his barnstorming around the country whipping up his base.  The Central American “invasion” is a 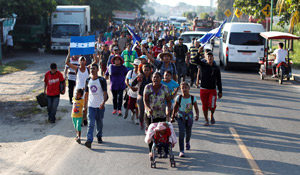 manufactured crisis intended to get his followers to the polls.  If you can’t convince ‘em, scare the hell out of them.

No president has done more of that or with greater zeal that Trump, whose themes are simple: I know what’s best, and I will protect you from the invaders who want to steal your money, rape your women, kill you and vote Democrat.

While his colleagues were whipping up a national frenzy, Shep Smith, a lone voice in the wilderness at Fox News, told his listeners, “There is no invasion. No one is coming to get you. There is nothing at all to worry about.”

Calling the refugee caravan an “invasion” is intended to provoke fear among xenophobic followers but it also spawns violence. The real terror thereat here comes not from dark-skinned Latinos far south of the Rio Grande but white Christian men inspired by Trump’s white supremacy, fear mongering and hate, people who support him or wish he were even more extreme.

A Trump admirer mailed bombs to more than a dozen enemies denounced by Trump, starting with Soros, and in Pittsburgh a rabid anti-Semite slaughtered 11 Jews as they sat in Tree of Life Synagogue on Shabbat.  Trump’s first reaction to the shooting was not to condemn hatred but to say it might have been prevented if someone inside were armed, maybe a pistol-packing shammos.

Trump read a speech on the teleprompter drafted by aides and thought that absolved him of any blame for the violence. It did not, nor did the fact that his favorite daughter converted to Judaism erase the spreading taint of anti-Semitism.

He went to Pittsburgh on Tuesday, Oct. 28, despite the urging of some families of victims, many Jewish community leaders, the mayor and governor to stay away. Even Republican members of Congress wouldn’t go with him. Many felt the president’s incendiary anti-immigrant rhetoric fueled the hatred that led to the mass murder.

The ADL reported a record 57 percent increase in anti-Semitic incidents in 2017, the first year of Trump’s divisive presidency. The group said his anti-immigrant and anti-refugee rhetoric, according to the Los Angeles Times, “have emboldened white supremacist groups, which have embraced him.”

In memorial service in Washington, DC, Ron Halber, executive director of the Jewish Community Council of Greater Washington, said, ”Something has become rotten in America’s moral fiber, in our society….Anti-Semitism, racism and bigotry have been normalized”

Political Stunts, Abuse Of Power?
Former New York Mayor Mike Bloomberg accused Trump of “inciting” hate and violence instead of “unifying” the nation.  Presidents have “an obligation to set a moral standard,” something that -Trump has failed to do, he said.

The administration wants to put a question on the 2020 census about citizenship. Critics fear it would discourage immigrants from responding, leading to undercounting in many communities, and resulting in the loss of congressional seats and federal funding.

Dispatching thousands of troops to the border for a non-existent threat is a political stunt and abuse of power. So was spending millions of tax dollars to try to prove another Trump lie. He claimed three to five million people who voted for Hillary Clinton —the margin of her popular vote that exceeded his — were illegals, and he ordered a commission on voter fraud.

The only fraud was Trump’s charge and the commission led by Kansas Secretary of State Kris Kobach, who is now running for governor. Kobach, in the name of fighting the phantom crime of voter fraud, has long pushed for strict state and federal anti-immigration and voter suppression laws.

During the 2016 campaign Trump repeatedly raised charges of voter fraud when it looked like he wasn’t winning. He launched his campaign with a vicious attack of lies on Mexico and hasn’t let up.  He plays to a largely white, evangelical xenophobic base that hates immigrants and other minorities.

It is playing out in North Dakota with efforts to impede voting by Native Americans, deregistering black voters in Georgia, disenfranchising African-American, poor and elderly voters by purging voter rolls, and in many other, mostly Republican-led states, limiting early voting hours and locations and demanding various forms of identification

Divide And Enrage Theme
One of the most notorious is Georgia, where the state’s top election official, Republican secretary of state Brian Kemp, is also running for governor. He has pushed restrictive voting measures that critics call a form of suppression directed at voters most likely to back his opponent, Democrat Stacey Abrams, who would be the nation’s first African-American governor. Kemp and Trump accused her of wanting illegal immigrants to vote in Georgia.

Those are the twin pillars of Trump’s GOP in this midterm year: keep as many minorities from voting as possible, and stir up xenophobic, racist and anti-Semitic rage.

Unlike his predecessors in times of crisis, Trump has made no effort to unify the nation and heal its wounds. Quite the opposite. He takes pride in being able to divide and enrage. He refuses to tone it down because it works for him. And he hopes it will scare his followers to go to the polls on Tuesday.

Meet the Jewish military veterans running for Congress
What is Gab and where else are anti-Semites gathering on the internet?