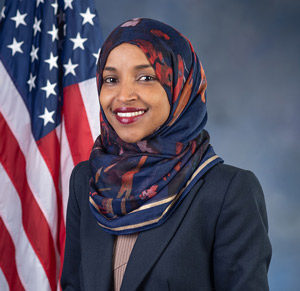 By RON KAMPEAS
WASHINGTON (JTA) – Rep. Ilhan Omar disavowed a 2012 tweet in which she said Israel had “hypnotized” the world, saying the term was “unfortunate and offensive.”

Omar, D-Minn., responding Tuesday, Jan. 19, on Twitter to a New York Times op-ed by Bari Weiss, said she had devoted too much time over the years to contextualizing the tweet, which she posted during the 2012 Gaza War.

“It’s now apparent to me that I spent lots of energy putting my 2012 tweet in context and little energy in disavowing the anti-semitic trope I unknowingly used, which is unfortunate and offensive,” the first-term lawmaker said.

Omar said her background, as a refugee from Somalia’s wars, made it an imperative to speak out when she saw the devastation wrought by war, including Israel’s actions in Gaza.

“It is important that when you see oppression taking place — when you see our values being attacked as humans — you stand up, and it doesn’t matter who the inhabitors of that particular region might be,” she said. “I will not shy away of criticism of any government when I see injustice — whether it be Saudi Arabia, Somalia, even our own government!”

Weiss thanked Omar and asked her to engage further on the Israeli-Palestinian conflict.

Omar is one of two freshmen to endorse the Boycott, Divestment and Sanctions campaign targeting Israel. Democratic leadership recently named her to the U.S. House of Representatives Foreign Affairs Committee, stirring complaints from Republicans and people who regard her as ani-Semetic.