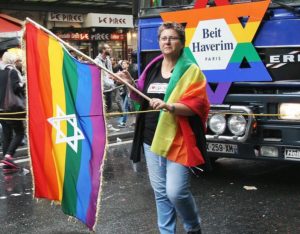 This weekend, at a lesbian march in Chicago, three women carrying Jewish pride flags — rainbow flags embossed with a Star of David — were kicked out of the celebration on the grounds that their flags were a “trigger.” An organizer of the Dyke March told the Windy City Times that the fabric “made people feel unsafe” and that she and the other members of the Dyke March collective didn’t want anything “that can inadvertently or advertently express Zionism” at the event.

Laurel Grauer, one of the women who was ejected, said she’d been carrying that Jewish pride flag in the march, held on the Saturday before the city’s official Pride Parade, for more than a decade. It “celebrates my queer, Jewish identity,” she explained. This year, however, she lost track of the number of people who harassed her for carrying it.