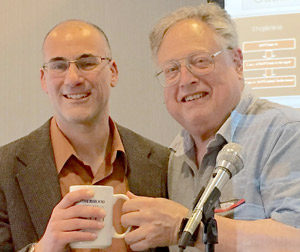 Importance
Muraven explained that self-control problems evidently contribute to personal problems, including relationship failures, economic problems, criminal behavior, failure to maintain healthful physical activity levels, and addictions such as to food, alcohol, and drugs. Such problems, according to Muraven, contribute to corresponding societal problems such as crime, and opioid addiction, he indicated that interventions to mitigate personal problems also could mitigate societal problems.
Muraven discussed an experiment in which young children were offered a marshmallow now or two marshmallows later. Children in the study were followed for decades. Children who chose immediate gratification (a marshmallow now) as adults were found to be more likely to experience problems, such as getting divorced or committing crimes.

The “marshmallow experiment,” Muraven emphasized, does not signify that self-control is hardwired; rather, he said, “self control can be fixed.” Muraven presented a simple model that helps people to understand and solve their self-control problems.

Fixing?
The TOTE Unit model consists of testing, operating, testing again, and exiting.  Testing means measuring a problem area, such as one’s body weight.  Operating means doing something about it, such as dieting. Testing again evaluates the result.  Once goals are met it is exit time.

Muraven reported that “going cold turkey works better on average, but not for everyone.” His research indicates that, for some people, partial withdrawal, such as quitting smoking gradually rather than all at once, is easier. Further, practicing self-control to solve relatively easy problems can strengthen self-control for harder problems. Such practice therefore may help to overcome “self-control depletion,” as when people confront multiple problems simultaneously.
Muraven provided hints for success, such as making self-control choices automatic. A dieter, for example, might plan to say “no thanks” to cake routinely instead of deciding anew each time it is offered. Also useful: use reminder cues, such as a mirror placed on the refrigerator door. Pause, maybe count to ten, before acting.  Be mindful, maybe via meditation.  Especially important: “learn to trust your future self,” to avoid succumbing to temptation now on the pessimistic assumption that you will succumb in the future, so you might as well succumb now.

Motivation
Muraven said, “I don’t want to overshoot the importance of self-control.” He acknowledged that not all issues are amenable to solution via self-control. For problems that are, however, motivation is key. Intrinsic motivation, meaning having personal reasons for exerting self-control, is better than having extrinsic reasons, such as having a nagging spouse. “Exerting self-control is not easy,” Muraven concluded. “It requires a lot of work.”