In Europe, synagogues are protected like fortresses. Do we want that here? 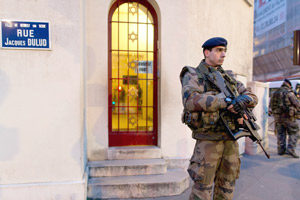 By CNAAN LIPHSHIZ
BRUSSELS (JTA) – Will security at American Jewish institutions now mirror that of Europe, with its police protection, armed guards, panic rooms and sterile zones at synagogues? It’s a possibility that is being debated more seriously than ever before following the Tree of Life Congregation shooting  in Pittsburgh in which a gunman killed 11 people.

Rabbi Jack Moline, president of the Interfaith Alliance, told The Washington Post that posting armed guards outside synagogues in some places would be “prohibitive” to Jewish communal life itself. But Gary Sikorski, director of security for the Jewish Federation of Metropolitan Detroit, told the Detroit Jewish News that the idea, suggested by President Donald Trump after the attack, is “not a bad one.”

Would Take Millions $
European security professionals say that even if Sikorski’s approach prevails, it will take at least a decade and hundreds of millions of dollars before U.S. Jewry’s security infrastructure matches the European counterpart.

“The security doctrine you see in Europe is the result of decades of evolution,” said Ophir Revach, director of the European Jewish Congress’ Security and Crisis Center. “It was built on lessons from terrorist attacks in the 1960s and adjusted constantly. It’s pretty comprehensive.”

Would Take Time
Even if a critical mass of U.S. Jewish communities decide tomorrow that they want to replicate the European model, Revach said, “Optimistically speaking, it will take at least a decade to achieve.” When it comes to security, he said, “American Jewry is at the beginning of a long journey.”

In several European countries, synagogues are under constant protection of police or army troops. Most of them have volunteer guards, including armed ones. Many also have a security command room, where trained professionals or volunteers use elaborate video surveillance systems to monitor their premises, often while exchanging information with other Jewish institutions in real time.

Does It Work?
In 2015, a volunteer guard outside Copenhagen’s main synagogue was shot dead after engaging an armed Islamist who had intended to carry out a shooting attack inside the building, where 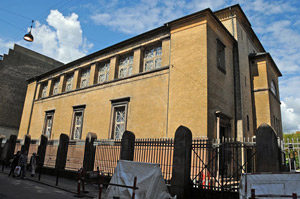 The Great Synagogue of Copenhagen was the site of a deadly attack in 2015. Photo courtesy of Wikimedia Commons.

dozens of people were celebrating a bat mitzvah. Dan Uzan’s intervention allowed police to shoot the assailant, who never made it inside the shul.

A year earlier, a dozen or so volunteer guards staved off dozens of rioters who had intended to storm the Synagogue de la Roquette in Paris as payback for Israel’s actions in Gaza. As 200 worshippers waited inside, the defenders held their ground for 20 minutes amid a vicious street brawl with the attackers until police finally arrived at the scene.

“Dan Uzan’s death was tragic, but from a security point of view it was a system that did what it needed to do,” Revach said.

Had the Tree of Life synagogue been guarded, “this attack may have been prevented,” he said. “Even armed perpetrators are deterred in a major way by guards.”

Federal Aid Available
Others have a closed-doors policy in which visitors must request entry through an intercom system.

In recent years, more and more Jewish federations, the communitywide fund–raising groups, have hired full-time security directors for their facilities and to advise their donor agencies. The Secure Community Network, the security arm of the Jewish Federations of North America and the Conference of Presidents of Major American Jewish Organizations, was formed in 2004. Since then, the number of federations with full-time security directors grew from two to 30, according to the Post.

But many American synagogues, including Tree of Life, had been leaving their doors open on Shabbat—a scenario that became unthinkable years ago in Western Europe, where jihadists have carried out several deadly attacks in recent years on Jewish targets.

Closed Door Policy
Joel Rubinfeld, the president of the Belgian League Against Anti-Semitism, remembered feeling “simultaneously envious and worried” when he was greeted recently to a major New York City synagogue by a concierge in his 70s—and no one else.

Before 2015, even at-risk synagogues like the Grand Synagogue of Marseille, France, had lax security and at times open doors. But the attacks in Paris that year prompted all but the most distant synagogues of Western Europe to abandon the open-door policy they used to have.

European synagogues by and large now employ a multilayered defensive doctrine of several threat circles in cooperation with law enforcement.

“It accounts for all kinds of scenarios, not just a shooting but also a car bomb, firebombs and snipers,” Revach said.

Awareness Is Key
Each scenario requires building adjustments, sometimes just adding a security barrier and at other times replacing windows with bulletproof glass. Then there’s the need to set up international, national and regional situation rooms to help communities coordinate their activities.

If American Jewry quickly ups the security arrangements around its institutions, “there’s still the issue of awareness,” said Sammy Ghozlan, a retired police commissioner and the president of the National Bureau for Vigilance Against Anti-Semitism in France.

“It’s not enough to build a security,” he said. “You need a community that’s drilled at maintaining it even when nothing happens year after year, so that when the threat does appear, it is met. It needs to be hardwired into you.”

American Jewry is facing a “monumental challenge” if it seeks to adopt the European security model, Ghozlan said.“It will take them at least 15 years,” he said, noting that American Jewry is “far larger and more far-flung” than its European counterpart, making the task more complicated than in France.

“We are witnessing a Europeanization of the situation in the United States for Jews,” he said. “It takes time for a worldview to change, but I believe American Jews have the resources and resourcefulness to fix the security problems exposed in Pittsburgh.”