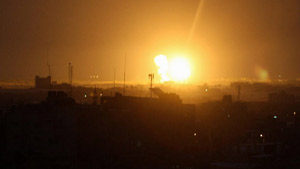 By DANIEL SIRYOTI
(Israel Hayom via JNS) – Prior to reports of a ceasefire on Monday night, March 25the Hamas terrorist organization threatened to escalate its response to airstrikes in Gaza by the Israel Defense Forces. In the late evening hours, the group announced that “the resistance would expand its missile range as long as the Zionist enemy’s attacks continued.”

Hamas spokesman Mushir al-Masri threatened: “We will respond with force to the criminal Zionist onslaught. Red lines have been crossed, and we will not remain silent.”

Confrontation Continues
Ahead of the Israeli airstrikes on the coastal enclave in response to a rocket launched from Gaza that struck a home in the central Israeli moshav Mishmeret, injuring seven, Islamic Jihad head Ziad al-Nakhla had warned that “an Israeli attack on the Gaza Strip will result in a forceful response.”

In a joint statement, Monday, armed Gazan factions said talks aimed at reaching a ceasefire with Egyptian mediators had failed, and that they were now preparing for a confrontation.

Another Human Error?
According to reports coming out of the terrorist enclave, the rocket that struck Israel’s central Sharon region was likely launched from the vicinity of Rafah in southern Gaza. Nevertheless, senior Hamas officials told the Al Arabiya news channel and Al Jazeera network that the rocket’s launch had been the result of “human error.”

Hamas’s national security mechanism issued a message on Monday, according to which “residents of the [Gaza] strip must not relay information over the Internet or by telephone of the location of Hamas activists, the launching areas, the movement of forces and activists in the Strip.”

According to the report, Hamas said that “those who violate the emergency regulations are expected to face serious charges, up to and including treason.”

The assessment in Gaza is that senior Hamas and Islamic Jihad officials will head underground out of concern of targeted assassinations. It has also been reported that Hamas and the armed factions in Gaza have ordered the evacuation of command centers and bases.

In addition, armed Palestinian factions convened in a joint operations room. Unlike previous instances, no information was given as to where and when the meeting was held.

Gaza escalation holds both promise and peril for Netanyahu
Survival is due to ‘miracles,’ says father in central Israel whose home was hit by rocket