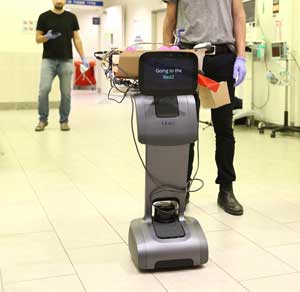 Rafael took a robot made by the TEMI company and placed multiple intelligent capabilities on it, enabling it to become a fully autonomous system that comes into close contact with COVID-19 patients in place of nurses.

By YAAKOV LAPPIN
(JNS) – The arrival of the coronavirus global pandemic came as suddenly for Israel’s Rafael defense company as it did to many other companies, yet it took very little time for Rafael to spring into action and quietly transform the face of Israeli hospitals wards.

“Our Nature As A Nation”
“Part of the Israeli DNA is to face up to missions together,” Irit Idan, executive vice president, and head of research and development at Rafael, told JNS in recent days. “This is our nature as a nation. From the moment that this incident began rolling, Rafael started floating many ideas on how we can assist the health-care system.”

During ordinary days, Rafael produces cutting-edge defense products, such as the world famous Iron Dome air-defense system, the David’s Sling air-defense system and a host of combat systems for land, air and space, in addition to missiles and communications systems.

Along with those activities, the company sprang into action to upgrade the medical establishment’s capabilities in the war against a very different kind of enemy. Idan led the company’s assistance program for hospitals, and said that the first step involved getting a good understanding of what medical personnel on the new frontlines needed most.

Learning The Problem
Idan and her team traveled to hospitals, visiting coronavirus wards around the country and hearing firsthand about the daily problems faced by doctors and nurses.

“Two months ago on a Saturday afternoon, a doctor went into a coronavirus ward and broadcast from it on Zoom through her phone for 90 minutes,” recalled Idan. “I saw the entire process unfolding in this battle. The doctor explained to me what she was dealing with so that we could understand the challenges and think about the solutions we wanted to provide them with.”

Keeping Safe
Rafael’s first conclusion was that the principal problem faced by hospitals was the entry of medical teams into hazardous, virus-filled environments during their day-to-day work. This led to a series of groundbreaking solutions.

The first of these is a robotic assistance tool, currently roaming hospital corona wards. Rafael took a robot made by the TEMI company and placed multiple intelligent capabilities on it, enabling it to become a fully autonomous system that comes into close contact with COVID-19 patients in place of nurses. The robot, which conducts tasks such as food distribution and logistics, can navigate its own way around the hospital and bring trays directly to beds. It is active at the Assaf Harofeh Medical Center in Tel Hashomer; the company has received requests from other hospitals as well.

The robots are also used to enable patients to communicate with family and friends through audio and video links. “We know that even for people who are sedated on a ventilator, it is 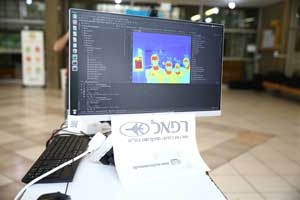 An acute problem identified by Rafael’s Irit Idan and her team is the need to remotely transmit medical readings of patients back to nurses and doctors to reduce their risk of infection.

important for them to hear the voices of their loves ones,” said Idan.

A second acute problem identified by Idan and her team is the need to remotely transmit medical readings of patients back to nurses and doctors to reduce their risk of infection.

Mutiple Solutions
Critically ill patients hooked up to life-support machines have readings of oxygen saturation, pulse and other vital signs constantly monitored, while an automatic nourishment system also transmits key information. “We saw that nurses and doctors always had to go in and see if everything was alright. They would have to suit up in full personal protective equipment each time,” reported Idan.

Rafael developed multiple solutions for this. It fitted ventilators and nourishment machines with communication cables to transmit the readings back to a separate room, and in cases where communications cables could not be fitted, installed a computer card to the back of the machines that deciphered their protocols and sent them to a nurses’ room via WiFi. “Now, they can always monitor the patients’ readings without needing to go in,” said Idan.

In other hospitals where machines could not be fitted with computer cards, Rafael took cell phones, installed its image-processing application on them and placed them opposite the monitors. From there, the phones transmitted the readings, translated them into text messages and sent them to the nurses’ room via WiFi. Such a solution is, for example, active in the Western Galilee Hospital in Nahariya.

“We are offering these solutions to the entire world,” stated Idan.

Such ventilators create aerosols around the patients that are filled with viruses.

“Doctors told us that when they approached such patients, they’d get infected. We took the big gas masks that were distributed to those with beards during the First Gulf War and installed connectors to it that link it to the ventilation system. This is now in clinical trials in two hospitals,” explained Idan. “We have passed this design on to medical organizations around the world.”

Rafael’s subsidiary, Opgal, which produces advanced thermal cameras, is also in operation in hospitals to detect patients with fever. Idan recalled how such a camera detected a fever in an elderly woman who had entered the Bnei Zion Medical Center in Haifa, even though the woman was not aware of it and had entered the building because of an eye issue. The hospital’s director general instructed the woman to head directly to the ICU for further testing. 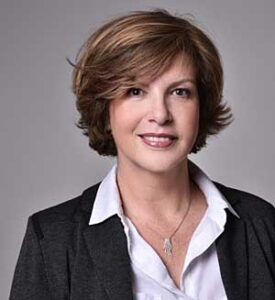 Irit Idan, executive vice president, and head of research and development at Rafael.

Splitting Ventilators
Additionally, Rafael worked with hospital doctors to develop a system that enables two patients to be treated by a single ventilator, with a separate ability to control parameters for each patient. “We built a real splitter using standard medical components,” said Idan. “This allows for separate control of pressure in the lungs of each patient. That is what was needed.”

Although there are no shortages of ventilators in Israel, Rafael did distribute this design around the world, and has answered requests from medical centers in Florida and South America asking for information on how to build the system.

In the field of ventilation production, Rafael answered a call to help Israeli ventilator producer Flight Medical meet a government order for 1,000 machines. The company usually makes 30 machines a month, so Rafael moved in with its production capabilities to boost production rates massively.

“They are the experts, not us,” said Idan. “They are a small company that now has huge backing, including in the acquisition of components.”

She described seeing a lab set up to examine ventilators right next to a line that produces missiles for the Iron Dome air-defense system. “It is a surreal view, and it’s how we created solutions for the here and now, because that is what was needed.”

Gratitude
Asked to describe the feedback that she has received from hospital staff, Idan recounted powerful messages from frontline teams.

“The highest satisfaction came when we were leaving the Rambam Hospital [in Haifa], and the chief nurse of the hospital in charge of the coronavirus ward said, ‘you have brought light in dark days. You understood our needs and provided solutions for them,’ ” she said.

Another medical staff worker sent Idan a WhatsApp message that moved her deeply. The message stated: “I as a doctor save one or two people a day. This is my daily work. What you did here is change the face of the world of medicine. I have no words to describe what you did.”

“For me to receive such a message,” said Idan, “I don’t need anything more.”