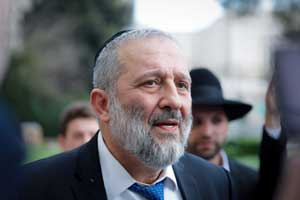 Israeli Interior Minister Aryeh Deri delivers a statement to the media a day before the Israeli election, in Jerusalem on March 1, 2020. Photo courtesy of Olivier Fitoussi/Flash90.

By YEHUDA SHLEZINGER
(Israel Hayom via JNS) – Israeli Interior Minister Aryeh Deri on Sunday called on Israel Security Agency (Shin Bet) Director Nadav Argaman to increase the protection afforded to Israeli Prime Minister Benjamin Netanyahu and his family, saying that the growing incitement and threats against Netanyahu personally “could herald a catastrophe.”
“In recent weeks we have seen growing incitement against the prime minister, including calls for harming his family and his assassination,” wrote Deri in a letter. “As a former member of late Prime Minister Yitzhak Rabin’s government, I cannot sit idly by vis-à-vis these alarming incidents of incitement and the calls to physically harm Netanyahu and his family,” he added.

Prime Minister Rabin was gunned down by radical right-wing activist Yigal Amir on Nov. 4, 1995, in Tel Aviv. Amir later cited his objection to Rabin’s policies, particularly the signing of the 1993 Oslo Accords, as the reason for the murder.

The weeks leading to Rabin’s assassination were rife with protests against the Oslo Accords, with many far-right activists saying the prime minister had to be stopped “by any means necessary.” He was infamously portrayed in Nazi uniforms, labeled a “traitor,” and several extreme rabbis even went as far as to issue a Pulsa deNura, or Kabbalistic “death curse,” against him.

The current public atmosphere is very troubling, Deri wrote, stressing, “We can never again say we didn’t know; that our hands are not stained with blood. … I’m aware of the fact you [Argaman] and the Shin Bet are making great efforts to protect the prime minister and his family, but I will be remiss in my public duty if I do not warn of what may come and do everything to ensure we spare no effort to prevent such a catastrophe.”

Israeli society, he warned, “will find it difficult to weather another such incident.”

Freedom of protest and expression “are fundamental principles of democracy and we must preserve them,” the interior minister continued. “Leveling scathing criticism [at elected officials] is legitimate, but incitement to violence against the prime minister and his family cross a red line.”

Netanyahu has filed several police complaints over the past few weeks over threats made against him.

Last week, Yair Netanyahu, the prime minister’s son, asked Attorney General Avichai Mandelblit to order the police to investigate threats made against him, as well.

Public Security Minister Amir Ohana warned last week that the level of incitement currently being directed at Netanyahu “dwarfs what was seen in the lead-up to Rabin’s assassination.

“What we saw [in the protests in Jerusalem] was anarchy [led by] agents of chaos seeking to sow panic and despair in the public,” Ohana said.