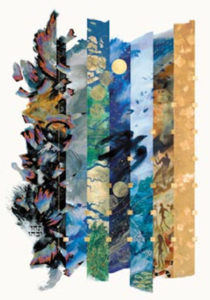 An  illuminated illustration from the St. John’s Bible.

“The St. John’s Bible in Interfaith Perspective” will be the theme of the Hayyim and Esther Kieval Institute for Jewish-Christian Studies at Siena College’s colloquium, Oct. 28-29. Kieval Institute events are free, kosher, and open to the public.

According to Dr. Peter Zaas director of the Kieval Institute, The St. John’s Bible was the first handwritten, hand-illuminated Bible to be produced in some 600 years. It was commissioned for the 150th anniversary of the founding of St. John’s University in Collegeville, Minn.

The Benedictine monks of St. John had calligrapher Donald Jackson, produce the seven full folio volumes at his scriptorium in Wales. The hand-written volumes, written on fine vellum, contain 175 illustrations, many of them illuminated in gold leaf.

“While the illustrations reflect the Catholic sensibility of its commissioners, the team of artists responsible for them incorporate images from a wide variety of religious traditions, including Judaism, as well as a scientific understanding of the cosmos,” said Zaas.

For the Kieval Institute’s 34th annual colloquium, two scholars, Fr. Michael Patella of St. John’s University and Dr. Adele Reinhartz of The University of Ottawa will discuss a variety of the illustrations in the St. John’s’ Bible from an interfaith perspective.

The scholars will present formally and engage in discussion with those attending the program on Sunday afternoon, Oct. 28 at 2:30 p.m. in the Key Auditorium, Roger Bacon Hall, Room 202.

Both speakers will join Zaas, and Rabbi Rena Kieval, acting as moderators, in an informal discussion of the same topic on Monday morning, Oct. 30, from 10 a.m. until noon in Lonnstrom Dining Hall, Norm Dining Room. A brunch will be served. Bishop Edward Scharfenberger of the Albany Roman Catholic Diocese will offer closing remarks.

Siena College owns a Heritage Edition of the St. John’s Bible, which is displayed in the Yates Gallery of the Standish Library at Siena. It is a full-size facsimile. It is two feet tall by three feet wide when open, it is the exact size of the original manuscript edition, and is displayed in seven cherry cabinets built for the purpose by the artisans in Siena’s carpentry shop. The Yates Gallery is open to the public and is free of charge.