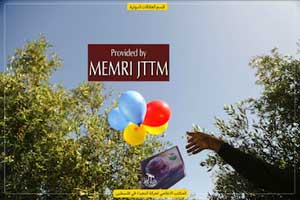 The Al-Nujaba Movement, an Iranian-backed Iraqi militia, announced on its website that it had launched balloons into Israeli territory on June 6, 2020. Photo courtesy of MEMRI.

(JNS) – An Iranian-backed Iraqi militia, recently announced on its website that it had launched into Israel balloons with photos of high-ranking “martyrs,” a report shared exclusively with JNS by the Middle East Media Research Institute’s Jihad and Terrorism Threat Monitor reveals.

According to the MEMRI JTTM report, the Al-Nujaba Movement’s office for international relations issued a statement on June 6 explaining the balloon launch.

“With these photos, the movement wanted to emphasize that the martyrs’ path will continue until the liberation of holy Al-Quds [i.e., Jerusalem] and to send a warning to the Zionist entity that there will be consequences for any miscalculations it makes,” the statement reads. “If such a mistake happens, forces from all over the countries of the resistance axis will line up against this usurper entity.”

The photos attached to the balloons include those of assassinated Iranian commander Qassem Soleimani, head of the Quds Force of the Islamic Revolutionary Guard Corps; Imad Mughniyeh, founder of Lebanon’s Islamic Jihad Organization and a deputy leader of Hezbollah; and Hamas terror chief Ahmed Al-Jaabari.

Photos of the balloons were included with the statement, which pointed to a video, taken by the group’s psychological operations department, indicating that drones were quickly dispatched to identify the flying objects.

The movement also announced on its website that its staff in Gaza had distributed aid baskets to the families of Palestinian prisoners and those who were killed while fighting Israel, according to MEMRI JTTM.

Israeli rabbis are divided over temperature checks on Shabbat, a tool to stop the spread of disease
Dear Jews: The summer of 2020 is not about us!