Is Cynthia Nixon an honorary member of the tribe? In Shabbat sermon of 2011 she praised Andrew Cuomo 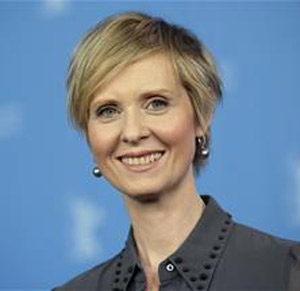 By BEN SALES
NEW YORK CITY (JTA) – Cynthia Nixon, the former “Sex and the City” star who recently announced her campaign to be New York’s next governor, is hoping to win the votes of the state’s 20 million citizens.

But the actor and political activist has already won the hearts of some progressive Jewish leaders.

Nixon isn’t Jewish herself, but she’s almost an honorary member of the tribe. Her two eldest children from her first marriage are Jewish and have both been bar- and bat-mitzvahed. At least one of them attended Hebrew school at B’nai Jeshurun, a liberal synagogue on Manhattan’s Upper West Side.

She’s also an active member of Congregation Beit Simchat Torah, Manhattan’s most prominent LGBTQ synagogue, and has spoken there multiple times. In June 2011, she delivered a Friday night sermon at CBST on the same day that same-sex marriage became legal in New York state. Most of the speech was about the political victory, but it wouldn’t have sounded out of place coming from the pulpit of a liberal activist rabbi.

Nixon used Hebrew phrases, made a Passover Haggadah reference and quoted at length from that week’s Torah portion, Korach, which tells a story of a failed populist rebellion against Moses and Aaron in the desert.

“Of course, any time there’s progress, it always comes with a backlash, and the bigger the step forward, the bigger the backlash, which brings us to this week’s parsha,” Nixon said to laughs, using the Hebrew word for Torah portion.