DC Report: Is McConnell a roadblock to democracy? 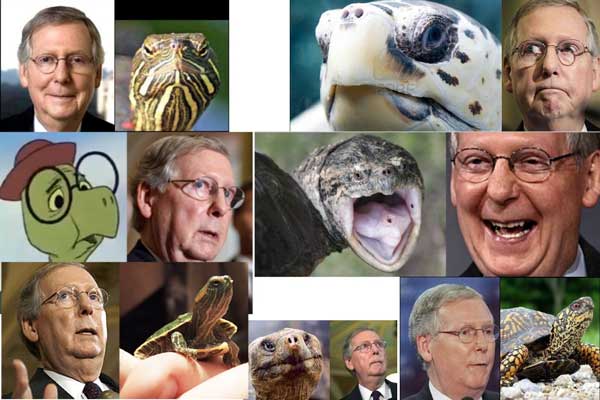 DC Report
By Douglas Bloomfield
In the first Democratic presidential debate, NBC’s Chuck Todd asked the 10 candidates to name the biggest “geopolitical threat to the United States.” Only Washington Gov. Jay Inslee got it right. “The biggest threat is Donald Trump.  No question about it,” he said. Todd should have asked them to identify the greatest threat to American democracy. The answer would be the same, but more urgent.

Freedom House, the independent human rights watchdog, said President Trump poses an existential threat to American democracy because of his assault on “essential institutions and traditions including the separation of powers, a free press, an independent judiciary, the impartial delivery of justice, safeguards against corruption, and most disturbingly, the legitimacy of elections.”

Chief Enabler
Trump can’t do it alone, notwithstanding his stratospheric self-esteem. It wasn’t Vladimir Putin, who may have been a valuable campaign asset and role model. Donald Trump’s chief enabler and protector is Mitch McConnell, the Senate majority leader. Doing their grunt work is an emasculated Republican Party terrified that Trump will twitter attack them and encourage primary challenges.

The Kentucky Republican controls the Senate agenda and has made it his mission to block any legislation Trump opposes, pack the federal courts with conservative judges regardless of qualifications, prevent serious investigations into Trump and his family and make sure a president he doesn’t particularly like gets what he wants.

Shifting In The Wind
Unlikely as it seems, the two have much in common, shifting with the political winds when it suits them. McConnell used to be a liberal Republican and Trump a Democrat, but now they’re conservative Republicans. Both used to be admirers of Martin Luther King and pro-immigration; now they’re not.

Neither man is an ideologue nor a conservative visionary. McConnell is an obstructionist who calls himself a “proud guardian of gridlock.” His cold, dispassionate approach helps explain why the GOP is known as the angry white guys party.

Key To Power
Fund–raising is the key to his power. He is the arch nemesis of campaign finance reform, an original advocate of the concept that campaign contributions are protected First Amendment free speech, later embraced by the Supreme Court in the notorious Citizens United case. His policy positions are guided largely by what contributors want and what it takes to keep him and the GOP in power.

It is also a key to his pro-Israel voting record. AIPAC board member Mayer “Bubba” Mitchell was an early supporter, top fund–raiser and “rabbi” vouching for McConnell in the Jewish community.

I’m reminded of that old adage about the honest politician being one who “once bought stays bought.” Shortly after McConnell came to the Senate, Mayer Mitchell interrupted an AIPAC board meeting to announce that he had just visited his friend Mitch, who told him he needed $15,000 to pay off his election debt. Checkbooks quickly came out and by the time he’d gone around the table, Mitchell had raised just over $15,000 and announced in his Alabama drawl, ”Let’s make it an even ‘Chai’ (the Hebrew word for 18),” and the checkbooks came out again. That afternoon he delivered in excess of $18,000 to his friend Mitch McConnel.

Jewish Concerns
McConnell may be on AIPAC’s side when it comes to supporting the current right-wing Israeli government, but not on the broad array of issues on the agenda of the mainstream American Jewish community, including environment, education, health care, gender rights, civil liberties, guns, campaign finance, election integrity, Social Security and Medicare.

Another influential backer is the secretary of transportation, Elaine Chao, who happens to be McConnell’s second wife. Politico reported she “designated a special liaison” at DOT to help steer millions in federal funds to her husband’s state, giving him campaign bragging rights.

House Democrats are drafting legislation to clarify the illegality of taking anything of value from foreign interests to influence U.S. elections. McConnell has already served notice he will ignore it and any other efforts to enhance election security.

Sludge, the investigative journalism website, reported that lobbyists for the nation’s two largest voting machine vendors have recently made contributions to McConnell’s campaign.

Sen. Ron Wyden (D-OR) said that by “staging a full roadblock of election security legislation” McConnell is “one of the biggest threats to American democracy.”

That may be because the Senate leader realizes Republicans can’t win an election fair and square so they have to resort to these and other moves, like opposing reforms dealing with election security, financing and voter access.

Getting Out The Vote
McConnell admitted as much when he said, “low voter turnout is a sign of a content democracy.” In other words, “if we made it easier to vote, too many people would vote for Democrats,” wrote Paul Waldman in the Washington Post.

Get Out The Vote (GOTV) is a major element of Democrats’ campaign strategy because they are convinced higher turnout works in their favor since they have the edge in registration numbers.

Conversely Keep Out The Voters (KOTV) seems to be the GOP theme. Republicans nationally and locally have been erecting obstacles to exercising voting rights, including access to the polls and harassment and exclusion of minority voters. That is behind the attempt to put a citizenship question on the 2020 census.

KOTV just got a boost from conservative majority on Supreme Court when it sanctioned partisan gerrymandering.

If Democrats want to undo the immense damage Trump is doing, they will have to do more than win the White House. They also must pick up at least four seats to win back control of the Senate. For that job several hapless presidential wannabes with the potential to win Senate seats in their states — Texas, Colorado, Montana — should stop hoping presidential lightning will strike and work for the greater good by focusing their ambitions on the Senate.

The big prize would be not only removing McConnell as majority leader but sending him back to Kentucky. Democrats’ top priority must be to find a strong challenger to unseat him.