DC Report
By Douglas Bloomfield – Prime Minister Benjamin Netanyahu can expect an enthusiastic response when he speaks to the The American Israel Public Affairs Committee (AIPAC) annual policy conference in Washington next month. After all, the organization has been in his pocket since he was the number two at the Israeli embassy 35 years ago.

What He Will Say
He has carefully cultivated the group’s moneyed machers and top officials, and he knows that he will be preaching to the converted. He will tell them of his great friendship with Israel’s devoted friend Donald Trump and how together they will bring peace to the Middle East and thwart the Iranian Haman who threatens Israel daily.

He will throw about how much he wants peace and it is all the Palestinians’ fault that the conflict continues. He’ll deservedly boast about progress he has made in relations with Egypt, Jordan, Africa and especially with the Saudis.

Iran Bashing Expected
He will repeat his new favorite catch phrase about the Iranian nuclear agreement, fix it or

nix it, and urge the crowd to press Congress for even tougher sanctions on Iran. It’s an easy sell. Iran sanctions have been at the top of AIPAC’s lobbying agenda since then Prime Minister Yitzhak Rabin urged the conservative, pro-Likud lobby to focus on the potential nuclear threat from Tehran and keep their hands off his burgeoning peace process, which he knew they didn’t like.

Iran bashing is a no-brainer for AIPAC and a Republican Congress that hated the agreement in no small part because it had the imprimatur of Barack Obama. That could lead to tightening the sanction screws to the breaking point. Netanyahu predicted Tehran will “do nothing” if Trump opts out; the Iranian foreign minister called that “delusional thinking” and said that its response would make opponents “sorry.”

Netanyahu, who fancies himself Mr. Security, may fire up his American audiences by sharing a warning from IDF chief of operations Maj. Gen. Nitzan Alon that chances for war are higher than ever for 2018 as Syria, Iran and Hezbollah move to solidify their gains against ISIS and turn their attention to Israel.

The lead headline on page one of the New York Times on President’s Day said, “Iran building up militias in Syria to menace Israel.”  Another Times report added “Iran, deeply embedded in Syria, Expands ‘Axis of Resistance.’” 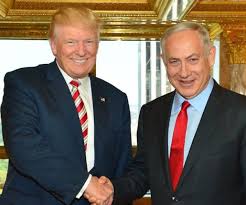 Rattling Of Sabers
At the recent annual Munich Security Conference, Netanyahu was rattling his saber in the shape of a part from an Iranian-made drone Israel shot down, saying that he is ready to go to war. He threatened to not just hit “Iran’s proxies” but “Iran itself” if they get too close to Israel’s borders. He is rightfully concerned that Iran, with potential Russian protection, may build permanent bases in Syria to manufacture missiles and other weapons and to train its proxies for war against Israel.

Talk of tangling with Iran will be at the top of Netanyahu’s agenda when he goes to the White House. Trump has said he will no longer certify Iran to be in compliance with the nuclear agreement, which Netanyahu will applaud although many among both countries’ nations’ military and intelligence leaders urge their leaders not to break the pact. It’s working, they’re saying, and if it is broken Iran will feel free to build a bomb now, not in a dozen years.

At War With Law Enforcement
Iran isn’t the only enemy the two leaders face.  Both are at war with their nations’ top law enforcement agencies and the media.  Both are under wide-ranging investigation and could face criminal charges that threaten to drive them from office and possibly to the slammer.

Netanyahu faces the more immediate threat. He is under scrutiny in four separate corruption cases (in one, several close associates have recently been arrested) and police have just recommended his indictment in two other cases involving bribery, fraud and breach of trust. Among the charges is trading political favors for tens of thousands of dollars worth of Cohiba Siglo V Cuban cigars and Dom Perignon pink champagne for his wife, Sara Netanyahu, who late night comedian John Oliver dubbed “Israel’s Marie Antoinette.” Police have recommended her indictment as well.

In Washington special counsel Robert Mueller is looking into the Russian role in the 2016 presidential election and other crimes. One of those lines of inquiry is believed to be possible obstruction of justice by the president for firing FBI Director James Comey for refusing to shut down the investigation of then-National Security Advisor Mike Flynn.

Flynn is one of two former Trump campaign and White House officials to have pleaded guilty to charges in the Russia investigation, two others have been indicted and 13 Russian nationals have been charged with election interference. A lot more shoes are expected to fall.

Looking For Military Diversion?
Trump and Netanyahu are understandably nervous about these investigations and can’t make them go away. That has led to speculation in both countries that they may be looking for a military diversion.

Trump has been talked out – for now at least —of his yearning to give North Korea’s “little Rocket Man” Kim Jong Un, a “bloody nose” strike against his nuclear facilities.  That could quickly ignite a major war and millions of deaths, Trump was told.

A surgical strike against Iran — maybe its factories and militia allies in Syria or even a nuclear site in Iran —could be less costly, but also lead to wide ranging consequences. Thousands of American military and civilian personal in the region are potential targets. And Israel faces an estimated 150,000 missiles belonging to Hezbollah in Lebanon alone, plus thousands more in Syria and Iran, plus ground attacks on three fronts.

Netanyahu has said that if attacked by Iranian forces or proxies in Syria, Israel would retaliate against Iran itself.  Similarly he has warned that if Hezbollah attacks  there would be no part of Lebanon off limits to Israeli retaliation.

The Gaza border is also heating up with the familiar cycle of rocket attacks and Israeli retaliation, and though both sides say they don’t want it, a new war could erupt soon.  That offers Netanyahu yet another opportunity for a diversionary war.

The trouble with wagging the dog is it can come back and bite you.

Why are Jewish leaders fighting about Qatar? Here’s a scorecard
Let’s talk truthfully about the issues behind mass shootings