Is the GOP Mortgaging the hereafter? Little guys need to prepare for big sacrifices…

DC Report
By Douglas Bloomfield
Donald Trump and the Republicans are finding that last year’s giant, permanent tax cuts for their wealthiest supporters and for corporations may not be their ticket to easy election victory in November. That helps explain the president’s intensified focus on stopping non-white immigration. But he still is claiming bragging rights for the tax bill, but he needs someone to pay for the enormous deficits he and the GOP created.

Guess who gets the bill?

Middle and lower income folks who only got small, temporary tax cuts are expected to show their gratitude by making the big sacrifices, primarily through giant reductions in Medicare, Social Security and other critical programs.

Impact On Aging Jews
That could have a huge impact on an aging Jewish community and the myriad community services that help those in need in our community.

Trump likes to brag about how well the economy is doing on his watch, but in six months the stock market has given up all gains for the year and then some, and jobs he once touted, like at Harley Davidson, are going overseas because of his spreading trade wars with Canada, Europe and China.

Winning can be so tiring. And costly.

The” biggest tax cut in history,” which it wasn’t, will add nearly $12 trillion to the deficit over the next decade. That’s tough on the world’s biggest (for the time being) economy.

Slashing Of Safety Nets?
Republican trickle down economics has never worked— unless you’re thinking of trickling 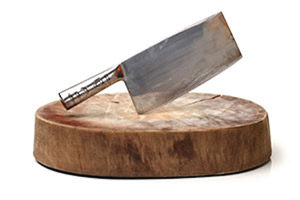 That little piece of creative writing, overseen by Budget Director Mick Mulvaney, calls for large increases in spending for defense and homeland security to be offset by major reductions in Social Security, Medicare, Medicaid, food stamps and other social safety net programs among many more.

You can see why the Office of Management and Budget director likes to call himself “Mick the Knife.”

Robin Hood In Reverse
He is talking about eliminating meals on wheels and replacing food stamps with boxes of canned goods the government buys in bulk. Ironically, those feeling the most pain will be working-class, rural white Trump voters, the Washington Post has reported.

Republicans had no desire to balance the budget when cutting taxes for their wealthy base, but now it’s back to the old time religion. Sacrifice is called for, and who better to sacrifice than the poor, the elderly, the disabled and the ill?  Don’t let them kid you; these cuts have nothing to do with fiscal responsibility.  If that were so they wouldn’t have passed that irresponsible tax bill and would be making the rich pay their fair share.  This is Robin Hood in reverse.

The Washington Post opined that Trump’s intention to add “welfare” to the name of the Department of Health and Human Services seeks to “radically stigmatize” safety net programs in the eyes of white voters and “make them easier to cut or eliminate.”

When House chaplain Patrick J. Conroy gave a prayer before the tax bill vote reminding lawmakers about their obligations to the poor, Speaker Paul Ryan fired him.

GOP Chopping Block
The top targets on Trump’s hit list are the leading priorities on the agenda of most Jewish groups.  As an aging population, Jews may be more sensitive about health programs and those for the elderly and disabled. Programs like the Older Americans Act, meals on wheels, housing and energy assistance would be cut deeply or eliminated. But there is much more on the GOP chopping block.

Health care, education, environmental protection, hunger and nutrition, housing and energy assistance, and a commitment to social justice are all given short shrift in the Trump and GOP order of priorities.

Also targeted for elimination is federal funding for 123,000 public libraries and 35,000 museums across the country. Republican know-nothings also want to kill the Corporation for Public Broadcasting, the National Endowment for the Arts and the Humanities.

Violation of Campaign Promise
Trump has already violated his oft-repeated campaign promise “there will be no cuts to Social Security, Medicare & Medicaid,” and Mulvaney boasts that he has been pressing the boss for more and deeper cuts in those programs, like raising the eligibility age to 70.

Funding for school safety programs is to be eliminated despite the growing incidents of gun violence and other security problems at the nation’s schools.  But not to worry.  Those same lawmakers will be putting most of the “savings” to good use— protecting themselves by beefing up the Capitol Police.

It is easy to understand why Trump would want cut about $45 million in funding for Education Department programs to combat bullying and harassment and improve counseling and conflict resolution, given his own behavior.

Judgment Call
In a recent interview, Trump’s economic advisor Larry Kudlow said “spending for welfare programs and social spending” is “not a growth prescription. It’s just spending.”  Apparently spending money on people is wasteful in the eyes of this business-oriented administration. Trillion dollar tax cuts, on the other hand, can buy a lot of donations and votes.

Back when I worked in the Ohio Legislature, two lawmakers were discussing how to pay for some of the largest spending bills they’d ever passed. “We’re mortgaging the future,” said the newcomer.  His older colleague replied, “Future, hell.  We’re mortgaging the hereafter.”