Is the moon in Israel’s stars? 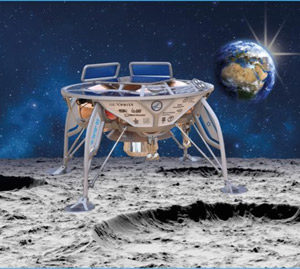 TEL AVIV, Israel – Israeli nonprofit SpaceIL, with the mission of landing an unmanned module on the moon, needs to raise $7.5 million by the eighth night of Chanukah, Dec. 20, or it will forfeit its dream of making Israel the fourth country to complete a controlled lunar landing.

SpaceIL is Israel’s entry in the Google Lunar XPRIZE Moon Race, started in 2012 to inspire innovators from around the world to develop low-cost methods of robotic space exploration. To win the $20 million grand prize, a privately funded team must be the first to successfully place a spacecraft on the moon’s surface, travel 500 meters on the moon, and transmit high-definition video and images back to Earth.

Chanukah Miracle Needed
When the prize was announced, three Israeli engineers, Yariv Bash, Kfir Damari and Yonatan Winetraub, brought a plan for Israel to win to billionaire businessman Morris Kahn, who provided the initial $50,000 registration fee for them to enter the race. In 2015, SpaceIL became the first of 16 competitors to sign a launch contract, with Spaceflight Industries. Unlike other competitors, SpaceIL invented a lunar module with the first thrust propulsion system to navigate the moon’s surface, enabling it to more efficiently complete the XPRIZE challenges.

Costs soon ballooned far beyond the team’s initial expectations, from $8 million to $85 million. SpaceIL now needs to raise an additional $30 million before the end of Chanukah for payments to Spaceflight Industries for the launch, Israel Aerospace Industries for building and testing the spacecraft, other partners and for paying its 20 engineers, or it forfeits the launch contract, and the race. The team has already received $22.5 million in pledges, contingent on its raising the final $7.5 million before the Dec. 20 deadline.

To Benefit STEM
“The impact of our spacecraft’s launch and its historic weekslong journey to land on the moon will resonate for years to come,” said SpaceIL CEO Eran Privman. “Our spacecraft is now completed and stopping here is simply not an option. We are determined to complete our mission, but we urgently need help.”

SpaceIL plans to dedicate the potential prize money to advancing STEM education in Israel, and the nonprofit has already told its story to 500,000 children nationwide through a volunteer network.

Why some Jewish groups aren’t thrilled about the upcoming tax overhaul
Jerusalem announcement: The only change will be blood spilled on both sides.