Is Trump opening his Pandora’s Box?

You don’t need a degree from Trump University to understand how the president’s campaign to blackmail the Ukrainian government into helping him smear former Vice President Joe Biden directly led to his impeachment.

Donald Trump doesn’t get it. Instead, he seems intent on reopening that Pandora’s box.

Nepotism On Trial
He shouldn’t be surprised to find his own children inside.

Trump has said he plans to resurrect and relentlessly pursue the investigations of Hunter Biden now that his father is the likely Democratic presidential candidate. “That will be a major issue in the campaign. I will bring that up all the time,” he declared.

Three Senate Republican committee chairmen took the cue and plunged in right after Trump, announcing their plans to hold hearings on Hunter Biden.

Tit For Tat?
While they’re digging up more dirt on Hunter Biden, House Democrats are taking a look at Trump’s avaricious progeny.

Investigations can open a rabbit hole or two. Once opened it is hard to tell where they will lead.  The impeachment trial may be history, but the hemorrhaging of scandals, leaks and information is not — and it could get a lot worse.

Trump’s own impeachment lawyer, Alan Dershowitz, may have given him a veiled warning during the Senate trial—Investigating the children of presidential candidates is valid because Americans should know if the nominee is corrupt.

Calling the Kettle Black?
Republicans have accused Hunter Biden of using his father’s position for financial gain. That may be true. It is also true that there may be no family in American history that has profited 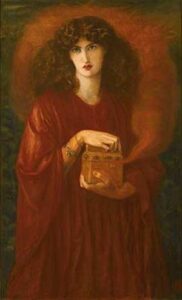 Painting by Dante Gabriel Rossetti “Pandora” 1871. She didn’t know what was inside. Does President Trump?

more off a president’s name and office than the Trump family.

Whatever Hunter may have profited, it is pocket change next to what the Trumps are vacuuming up. There’s little evidence Democratic and independent voters care much about Hunter’s history, but they, even some Republicans, may be alarmed to learn about the millions going into Trump family pockets everyday thanks to the presidency.

Mike Bloomberg’s top political advisor, Tim O’Brien, has warned, “If Republicans really want to make an issue out of Hunter Biden … there is going to be a scorched earth response aimed at all of the Trump children that is going to be unlike anything they’ve experienced thus far.”

Having been impeached essentially for blackmailing the Ukrainian government to dig up dirt on the Bidens, you’d think Trump wouldn’t want to revisit the scene of that crime, especially knowing how his three oldest children have profited off his presidency.

You can be sure Republicans will remind voters that Hunter had a drug problem that got him booted from the Navy, but they should expect Democrats to bring up Don Jr.’s drinking problem. He was dubbed “Diaper Don” in college for his drunken behavior, according to a book, Born Trump by Emily Jane Fox.  He admits “I used to drink a lot and pretty hard” but claims he is sober today.

Trump Kids’ Benefits
Ivanka Trump and her husband, Jared Kushner, have White House jobs that would be nepotism in any other administration, but Daddy’s Justice Department gave them waivers. Both have had extensive foreign business dealings, including in countries considered hostile to the United States, which may have prompted the intelligence community’s opposition to their security clearances. The president personally overrode those objections, too.

Although President Trump had said his family business would make “no new foreign deals” during his presidency, he apparently forgot to tell his children. They “appear to people all over the world to be his bagmen,” said Richard Painter, Bush 43’s White House ethics lawyer. They are “collecting business on his behalf” globally.

Eric, Don Jr. and Ivanka “have profited off their dad’s presidency,” according to a detailed account in GQ.com by Jay Willis. One deal was done with the official approval of Housing Secretary Ben Carson, the article noted.

On the same day the Kushners sat with Chinese president Xi Jinping at a White House state dinner, the Chinese government approved three trademarks for Ivanka’s business, and those were followed by two dozen or more, according to Citizens for Responsibility and Ethics in Washington (CREW).

Painter and Norm Eisen, who held the same job in the Obama administration, head the non-partisan CREW. In their view the president’s sons “have racked up a stunning 3,000-plus conflicts of interest for Trump” and “should be urgently investigated—not the Bidens.”

In 2018, while on the White House staff, Ivanka Trump and Jared Kushner reported income from their private businesses and investments of as much as $135 million, according to their official financial disclosure filings, the New York Times reported. It also noted that Kushner apparently had paid no federal income tax for several years.

The Times also reported that while Kushner was in charge of the administration’s Middle East peace policy, his real estate firm was involved in several Israeli-linked business deals, including a $30 million investment from a major Israeli financial institution.

Ivanka Trump and her brothers make nearly $4 million a year just off the family’s eponymous hotel five blocks from the White House which draws a lot of business from interest groups, lobbyists, foreign leaders and others wanting to curry favor with this administration.

The president used his Twitter account to promote the sale of a book by Don Jr., which was purchased in bulk by the Republican National Committee and conservative groups, helping make it appear to be a best-seller. Junior is also making highly paid speeches to friendly audiences.

The presidency has been very profitable for the Trump family. His children are cashing in big time.

Nepotism is as old as the republic. John Adams named his son ambassador to Prussia and John F. Kennedy made his brother attorney general (since prohibited). Members of Congress aren’t allowed to do it, so they get around the law by swap hiring each other’s relatives.

Donald Trump likes to boast about his presidency being the greatest in history. When it comes to corruption, he’s probably right.