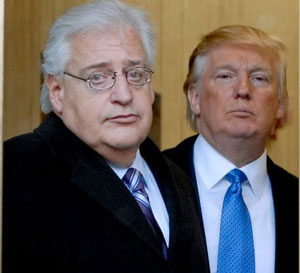 Friedman told the Israeli news site Walla on Thursday, Sept. 28, that Israel was occupying only 2 percent of the West Bank, that the two-state solution “had lost its meaning” and that settlements are part of Israel. The statements depart from longstanding U.S. policy.

“No Policy Shift”The U.S. has opposed settlement building, supported the establishment of a Palestinian state alongside Israel and brokered the 1993 Oslo Accords, under which Israel fully controls 60 percent of the West Bank. Settlement leaders say the physical footprint of settlements amounts to 2 percent of the territory’s land area.

President Donald Trump has distanced himself from the policy of previous administrations and has yet to call for a Palestinian state. But on Friday, State Department spokeswoman Heather Nauert distanced the U.S. from Friedman’s comments.

“His comments —and I want to be crystal clear about this —should not be read as a way to prejudge the outcome of any negotiations that the U.S. would have with the Israelis and the Palestinians,” she said regarding Friedman. “It should also not indicate a shift in U.S. policy.”

Top Trump Priority
When she was asked to clarify how much of the West Bank is occupied, Nauert said, “I don’t know that we have a map of that,” though countless maps of the territory are available.

Nauert said the Israeli-Palestinian conflict is a priority for the Trump administration on par with the North Korean nuclear threat. She also reiterated the U.S. opposition to Interpol adding the State of Palestine as a member.

Oded Revivi, the chief foreign envoy of the Yesha Council advocating for settlers, lauded Friedman “for using facts to describe the reality in Judea and Samaria.” “For decades,” he said, “the international community has been eating up Palestinian propaganda without checking the reality on the ground.”