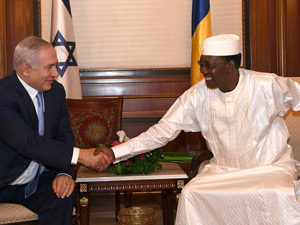 Israeli Prime Minister Benjamin Netanyahu and Chad’s President Idriss Deby meet on Jan. 20, 2019 in the capital N’Djamena, and later announce the resumption of diplomatic relations between the two countries after more than 45 years. Photo courtesy of Kobi Gideon/GPO.

The announcement came Sunday, hours after Israeli Prime Minister Benjamin Netanyahu landed in the African nation on what he called a “historic and important” visit.

“This is part of the revolution that we are doing in the Arab and Islamic worlds; I promised you that this would happen. There will be more major news. There will be more countries,” Netanyahu said Sunday morning, Jan. 20, as he boarded the plane to Chad.

Chad severed ties with Israel in 1972, due to pressure from the leader of Chad’s neighbor, Libya’s Muammar Ghaddafi.

Netanyahu and Chad’s President Idriss Deby told reporters during an appearance later on Sunday that one of the two agreements the two leaders signed during their meeting prior to meeting with reporters was the renewal of diplomatic relations.

The agreement comes two months after Deby visited Israel and met with Netanyahu.

“The relations between our countries were cut in 1972 for specific historic reasons, but our special relations continued all the time,” Deby said then. Deby has served as president of the Muslim-majority Chad since 1990.

An attack in the west African nation of Mali that left 10 Chadian U.N.  peacekeepers dead was in reaction to the visit to Chad by Netanyahu.

An Al Qaeda-linked Islamist group in Mali, called Al-Qaeda in the Maghreb, claimed responsibility for the attack on a United Nations camp in northern Mali on Sunday, shortly after Netanyahu and Chad’s president, Id Deby, announced that the two countries would re-establish diplomatic ties.

The claim for the attack and the reason for it was relayed by the Mauritanian Al-Akhbar news agency, which receives statements from the group, the French news agency AFP reported.

In addition to the 10 killed peacekeepers, another 25 were injured.

Mahamat Saleh Annadif, the UN envoy for Mali, in a statement called the attack “vile and criminal.” He said the terrorists “arrived on several armed vehicles.”

“It demands a robust, immediate and concerted response from all forces to annihilate the peril of terrorism in the Sahel” region of Africa, the statement said.

The U.N. Security Council has condemned the attack and paid homage to the peacekeepers.

There are about 13,000 UN peacekeepers deployed in Mali, to protect against violence by Islamist militias.