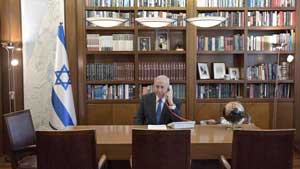 By JACKSON RICHMAN
(JNS) – Jewish and pro-Israel groups instantly applauded Israel and the United Arab Emirates for a peace deal on Thursday, Aug. 13, to normalize relations between the two countries—the first of its kind between Israel and a Middle Eastern country in more than 25 years, following Jordan and Egypt.

The American Israel Public Affairs Committee called the development “a historic breakthrough for peace and reconciliation in the Middle East.”

“The establishment of full diplomatic relations between Israel and the United Arab Emirates represents a historic breakthrough for peace and reconciliation in the Middle East,” said AIPAC in a statement. “We greatly appreciate the efforts of [U.S.] President [Donald] Trump and his administration in facilitating this major diplomatic achievement.”

The lobbying group called on “other Arab states and the Palestinians to follow their lead” and for the Palestinian leadership to “end its boycott of Israel and America and return to the negotiating table.”

“In taking this historic step, the UAE is paving the way for additional Arab and Muslim states to normalize their ties with Israel, which can help transform the region and enhance the prospects for a true and lasting peace between Israel and the Palestinians,” said the Conference of Presidents of Major American Jewish Organizations in a statement. “This agreement is a bulwark against the forces of extremism and radicalism in the region.”

“Having engaged with states in the Arabian Gulf and throughout the Arab world for decades, we hope this opens the door to further agreements between Israel and her Arab neighbors,” tweeted the American Jewish Committee.

“We welcome the news about Israel and the United Arab Emirates normalizing relations,” Mark Wilf, chairman of the board of trustees of the Jewish Federations of North America, told JNS. “The two countries have so much to gain from working together, and this decision could pave the way for greater recognition of Israel throughout the region and increase the prospects of peace.”

“This is a tremendously important and positive development,” B’nai B’rith International CEO Daniel Mariaschin told JNS. “The growing realignment of interests in the region will certainly contribute to stability in a chaotic neighborhood, and send a strong message to those who seek to promote that chaos that their efforts will not succeed.”

Zionist Organization of America president Mort Klein told JNS applauded the deal, saying “we hope other Arab states do the same. We look forward to UAE establishing its embassy in Israel’s capital, Jerusalem, and referring to Israel as the Jewish state.”

It is unknown where the Emirati embassy in Israel will be located. Most countries have embassies in Tel Aviv. The United States and Guatemala are the only ones to have theirs in Jerusalem, both having relocated there in May 2018.

Sarah Stern, founder and president of Endowment for Middle East Truth (EMET), called the development “a momentous day” and “a historic breakthrough.”

“This shows that another major Sunni Arab nation has finally come to accept that Israel is here to stay, and that it has a great deal more to gain by living and working side by side together and penetrating through the decades of old animosities,” she told JNS.

Even organizations critical of the Trump administration’s Mideast policies hailed the peace agreement.

“Israel suspends annexation effort. UAE agrees to normalizing ties with Israel. This is an important step towards peace. Congratulations to the leaders of Israel and the UAE,” tweeted the Democratic Majority for Israel.

On Twitter, J Street touted that the deal temporarily stopped Israel’s plans to apply sovereignty to parts of the West Bank, also known as Judea and Samaria, though the left-wing lobby acknowledged the agreement as “steps in the right direction.”

“Let’s have no illusions, though: Full Arab-Israeli peace can’t be made w/o Palestinians or while ‘de facto’ annexation continues unabated,” tweeted J Street.

J Street welcomes both “suspension” of de jure annexation plans & normalization of Israel-UAE ties. Those are steps in the right direction.

Israel, however, has said that sovereignty plans have only been suspended and not ended.

In a press conference on Thursday, Israeli Prime Minister Benjamin Netanyahu said he agreed temporarily to suspend sovereignty plans but is committed to carrying out the application in the West Bank, only in coordination with the Unitzed States.

U.S. support for Israel to apply sovereignty to parts of the West Bank would come “much sooner” than several years, according to officials.

Biden added that Israel applying sovereignty “would be a body blow to the cause of peace” and “virtually end any chance of a two-state solution that would secure Israel’s future as a Jewish and democratic state and uphold the right of Palestinians to a state of their own.”

Biden pledged that, if elected, he would “seek to build on this progress and will challenge all the nations of the region to keep pace.