Israel decides to end mandate of international observers in Hebron 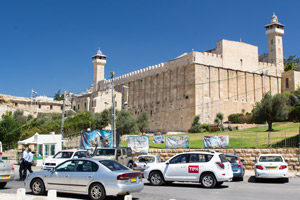 Breaking the Silence tour of Hebron on Aug. 28, 2015. Cave of the Patriarchs with vehicles of the Temporary International Presence in Hebron. Photo courtesy of Oren Rozen/Wikimedia Commons.

(JNS) – Israeli Prime Minister Benjamin Netanyahu recently announced his decision to terminate a mandate of international monitors in Hebron. “We will not allow an international force to act against us,” Netanyahu said in a statement announcing that the mandate would not be renewed.

The Temporary International Presence in Hebron (TIPH) was first established in 1994 and has been operating continuously since the 1997 Hebron Agreement, which was signed by Netanyahu and former PLO leader Yasser Arafat. According to its website, the TIPH is a civilian observer force that “observes and reports on breaches of the agreements between the Palestinian Authority and Israel on Hebron, as well as on violations of international humanitarian law and international human rights law.”

The TIPH consists of 13 local staff and 64 members who hail from Turkey, Switzerland, Norway, Sweden and Italy.

There has been growing pressure for Netanyahu to end the mandate of TIPH, which is renewed every six months, following two incidents where staff members were caught on camera attacking Israelis. The first showed TIPH’s legal counsel hitting a 10-year-old Jewish child across the face, while the second consists of a staff member slashing a tire of a Jew’s vehicle in the city.

Public Security Minister Gilad Erdan, who has been urging Netanyahu to scrap the mission, said that TIPH members had “cooperated with extremist organizations and promoted delegitimization of Israel.”

Professor Eugene Kontorovich, director of international law at the Kohelet Policy Forum and a professor at George Mason University who has advised the Israeli government to end the TIPH’s mission, said that the observer group was never meant to be permanent, and that its mission had been one-sided.

“The force’s mission has always been one-sided against Israel, but in recent years, they have done even worse by assaulting Jewish civilians; working with anti-Israel NGOs, thus undermining their own supposed neutrality; facing problems of internal corruption,” Kontorovich said in a statement.

“They have violated the terms of their mandate in many ways, and it is time to officially end it. Israel is acting entirely consistently with international law, in particular, the international agreement creating TIPH, which gives Israel the prerogative multiple times a year to not extend the presence.”

Hebron is considered the second-holiest city in Judaism behind Jerusalem and is home to the Cave of the Patriarchs.

The holy city had a continuous Jewish presence for thousands of years until the 1929 Hebron massacre, which resulted in dozens of Jewish deaths and the evacuation of the city’s Jewish community. Israel gained control of Hebron during the 1967 Six-Day War. Control of the city was divided as part of the 1997 Hebron Agreement, whereby the Palestinian Authority controls 80 percent of the city in an area known as H1, while Israel controls the remaining 20 percent, H2, where most of the city’s Jewish community lives.

How should Jewish leaders confront challenge of BDS groups within their communities?
New group of Democrats aims to counter perceived anti-Israel trend in party