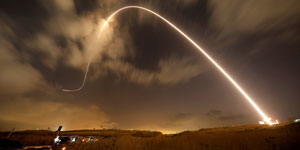 An Iron Dome battery fires an interceptor missile as rockets are launched from Gaza toward Israel near the southern city of Sderot, Aug. 9, 2018. Photo: Reuters / Amir Cohen.

By Benjamin Kerstein
The Algemeiner – Israel’s Defense Ministry announced on Wednesday that a breakthrough has been made in using laser beams to thwart aerial attacks.

According to Israel’s Channel 13, the technological development will enable the long-range targeting and stabilization of laser beams, allowing them to intercept targets at great distances.